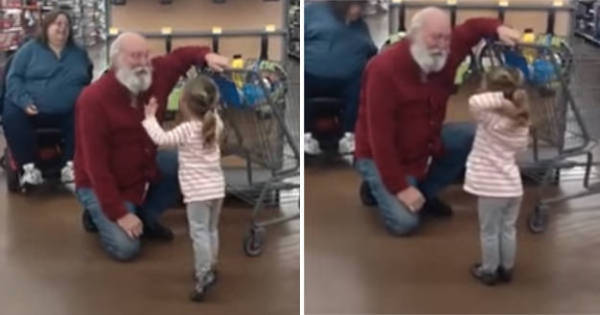 When a little girl in a mall spotted a big, jolly guy with a bushy white beard and a red shirt, she thought she’d spotted Santa doing his Christmas shopping. Amazingly, the man doesn’t miss a beat and plays along.

When she curiously approaches “Santa” (alias Roger), he chuckles and says, “Well, I’ve been told a lot worse!”

He then asks if she’s been a good girl this year and if she’s getting ready for Christmas, and she does a lot of nodding.

She shows Santa her painted nails (he’s very impressed) and tells him she’s leaving cookies out but he has to share them with the reindeer.

She reminds Santa that reindeers eat grass (not cookies, duh) and the lovely man just keeps rolling with it.

“They eat grass, you’re right they do. But up in the North Pole grass is pretty hard to come by. It’s all snow grass.”

Mom jumps in and says to her daughter, “Let Santa get back to his shopping!”

He wishes them “Merry Christmas” as the little girl waves him off.

Watch the adorable video below:

You know, the more we watch it and hear his deep voice and see how jolly and gentle he is we wonder… could it really be?

She Stopped To Buy Her Mom A Smoothie. What The Cashier Says Next Changes EVERYTHING

0
I think we can all agree: nothing turns a bad day around faster than kindness from a stranger. It can be as simple as someone...
Read more
Amazing

A Half-Naked Homeless Man Is Ignored On A Train. Then A Stranger Does THIS And Restores My Faith Humanity.

0
Unfortunately, loads of people in this world live under excruciatingly painful and painful conditions. It is difficult to know everyone’s story and be able to...
Read more
Photography