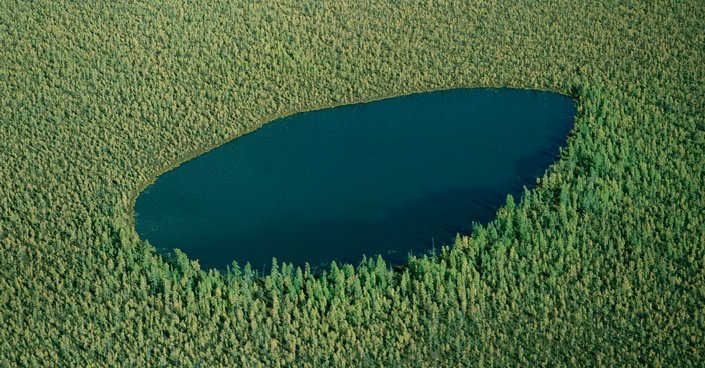 There are beautiful places on Earth that have never been visited by human beings. Few people realize today that these are places that are entirely preserved for the wild animals. Some of these places are so remote and so impossible to access that it would take plenty of efforts, time and skills. Yet, we know about the stunning beauty of these places thanks to the images we have seen from the air.
May be these places are so beautiful and captivating as humans have not set foot there and they remained thus pristine in their beauty.

Check ten of the most stunning and intriguing places on earth. Would you like to spend your holidays there?

The exact location of this mysterious lake is unknown. According to some, it can be found in the Tyumen region of Russia. How did it come to sit deep inside the forest? No one knows…

The word ’Tepui’ means ’home of the gods’ in the language of the indigenous people of Gran Sabana where these incredible, ominous natural structures are located.

This remote place is drenched in greenery. The mere sight of it gives you a feeling of the exquisite beauty, majesty and mystery of the natural world. Just imagine what it would be like to travel there.

This incredible, immense forest sprawls across nine different countries in South America: Brazil, Peru, Colombia, Venezuela, Ecuador, Bolivia, Guyana, Suriname, and French Guiana. It’s so huge that mankind can never hope to explore all of it — or know everything that’s hiding there.

This is the highest mountain in the world which has not been conquered by mankind. It’s located on disputed territory between Bhutan and China and soars 7,570 metres into the sky.

These rocky projections and canyons formed over a period of a million years, predominantly under the ground in the form of huge caves. Over the years, monsoon rains washed away metre upon metre of limestone and thick layers of chalky sediment, creating this system of unique, mysterious looking natural bridges, spires and gorges which can reach up to 120 metres in depth.

Hidden away in the southern part of the vast Indian Ocean, these islands are extremely far away from their ’home’ country of France. No planes or tourists go there, and the only way to reach them is via boat from the island of Réunion, close to Madagascar. They might as well be part of Atlantis for all humanity knows about these hauntingly beautiful islands.

For modern human civilisation, the Rock Islands are a remote area of the world we no virtually nothing about. However, at some point over the past few thousand years, we can be certain that people have set foot on them. We know this because archaeologists have found evidence of so-called ’tiny people’ — an offshoot of humanity which apparently had severely stunted growth — which used to live there.

Today, salt mining takes place in the vicinity of the Dallol Volcano, so strictly speaking this isn’t an untouched area. But the immediate area of the volcano is, of course, uninhabitable. Fascinatingly, scientists believe the alien-like landscape of the volcano bears a striking resemblance to the surface of Io, the violently volcanic moon of the planet Jupiter.

Located in the Equatorial zone of the Pacific Ocean to the south of the islands of Hawaii, this pristine island is supposedly home to a mysterious, magical force.

When Lake Superior Freezes, Something Amazingly Beautiful Happens. This Is Like Art.

Stunning Cloud Formation Appears Above Portugal, People Call It “The Hand Of God”

The 10 most Impressive corners of the Planet Untouched by tourists

30 flawless Photos taken one second before the inevitable

13 Devastating Photos to show your friend who doesn’t believe in climate change.

The Shape Of Your Feet Reveal Your Personality

0
You might be very surprised to learn that foot and toe shape can tell you something about personality. While everyone has toes, we don’t...
Read more
Amazing

This War Veteran Suffers From PTSD. Now Keep Your Eyes Open At What That Wolf Does! OMG!

0
Post traumatic disorder is a serious condition. War veterans are usually known to suffer from it. There are a lot of therapy programs conducted...
Read more
Fitness & Health