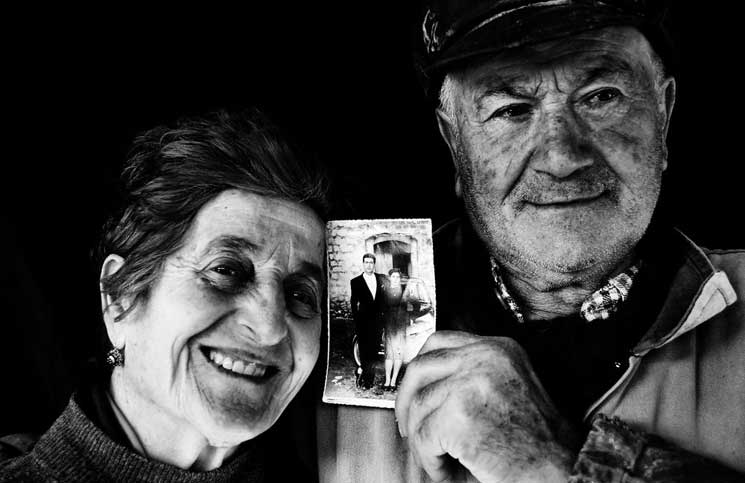 We decided to reach out to Margherita Vitagliano, the photographer, to learn more about her project “Frozen Frames.”

Vitagliano works with her subjects to find a photo of them when they were young. “I relate the memories that the photos arouse in them, the music, smells, and flavors of those special moments, and when I [have them] close their eyes, it is they who are reliving that past. When I have them open them, it is as a spectator looking into their eyes that I can feel on my skin what they have heard with their eyes closed.”

This passion for portraits and old photos had very personal origins. “The first photograph that meant something to me was of the hands of my grandmother holding an old photo. All of it happened one afternoon when I looked at old photographs in black and white, found in an attic in a box,” Vitagliano reminisces.

She has been working on the project since February 2013 and has already shared a dozen of these portrait pairs.

“I wish my pictures could talk, reveal emotions, convey friendship and memories of dreams never dormant, stories of the everyday, common to all and sundry as the beating of one heart, the common sentiment of every human being.”

Each of her portraits has a personal story to go along with it. Some are personal to Vitagliano, as well—she shares the story of the photo with us. “This affects me directly because the lady portrayed here was my elementary school teacher. We went back in time looking at her pictures in black and white, and from all the photographs, we chose one from when she was 20 years old and went to the sea. Before the shot, she left for a moment, and when she came back, I realized that she had put on lipstick, the same shade she used to wear every day when I was a child, so at that moment, I closed my eyes and imagined being a child again.”

“Memories are among the most powerful drugs; they manage to shake humans by bringing to light and reviving memories buried in some kind of hidden corner of the brain. “It’s only in the past that we reveal the beautiful opening of one hand and at the same time we try to grasp it so it doesn’t fade and vanish forever … ”

0
Juana Martinez confronted Starbucks employee about a $200 transaction She accused the 19-year-old employee of making a copy of her credit card Employee immediately admits the...
Read more
Positivity

The Iceland – Land of fire and ice