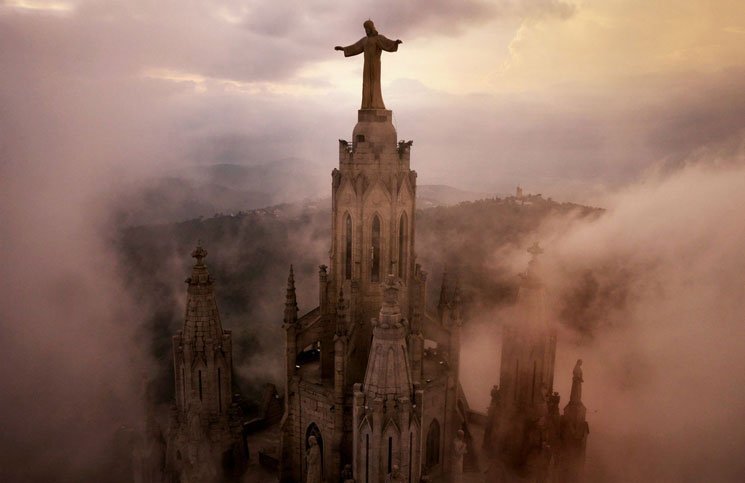 The sky is the limit when it comes to creative uses of drones for photography — see for example Dronestagram or the National Geographic magazine contest.

Given this new golden age of aerial photography, we are showcasing the what’s out there. Here’s our picks for the best photos that drones took in 2014.

An eagle soaring in the Bali Barat National Park in Indonesia.
IMAGE: CAPUNGAERO/DRONESTAGRAM

The Sagrada Familia in Barcelona

All eyes on the drone

U.S. Marines in Philadelphia prepare for a wreath-laying ceremony.

Kids playing in a soccer league in Athens, Greece, get ready for a game.

The church and the clouds

Students are seen in a schoolyard in El Dorado County, California.

A view of the famously tilted Pisa tower in Pisa, Italy.

Home of a Hermit

The Katskhi Pillar in Georgia has been home to a monk who’s been living there as a near-hermit for twenty years.

The Tamul waterall in the state of San Luis Potosi, Mexico.

The fireworks celebrating the 100th anniversary of two of the country’s biggest soccer teams in Sofia, Bulgaria.

The city of Mougins near Cannes in France.
>IMAGE: JULIEN06/DRONESTAGRAM

A flower girl looks toward the sky during a wedding in central Philadelphia.
IMAGE: TOMAS VAN HOUTRYVE

A view of the Sacre-Coeur, on the tip of Montmartre, in Paris.
IMAGE: AMOS CHAPPLE

Balancing on the Water

Balancing on the Clouds

Theo Sanson walks on a 280 feet long highline at 980 feet of altitude in Les Gorges Du Verdon in France.

Annecy, aka “Venice of the Alps”, France.

Group of vendors from Iquitos, Peru.

Kids playing in a soccer league in Athens, Greece, get ready for a game.

0
Reddit user “IsthatmyRemedy” was watching his son sleep when he noticed a “tattoo” on the boy’s arm. “Belv in your self.” Reddit Within hours of posting the...
Read more
Self Improvement

10 Things we Can Learn from Children

0
Childhood is unarguably the best part of one’s life. We always look back and smile at our childhood and ponder how we have grown...
Read more
Photography

0
Ready for some fabulous black and white contemporary interiors? Throughout the time we had quite a few stunning projects showcased on Freshome that were based...
Read more