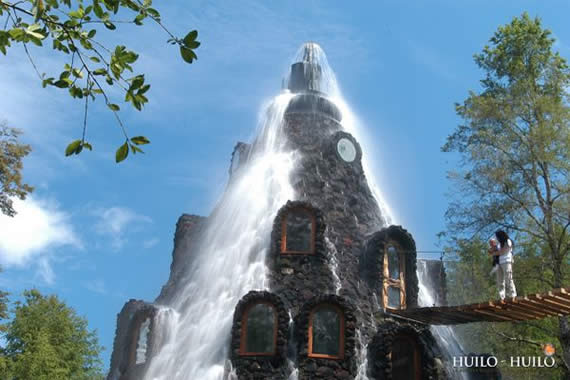 It looks less like a hotel tucked inside a UNESCO Biosphere Reserve than a CGI set piece from Avatar.

It’s a hotel built in a man-made volcano that spews water instead of lava, that’s covered in rainforest moss and vines and is accessible via monkey bridge, sitting within a reserve that’s 232 square miles of lush, teeming nature.

Soak in outdoor hot tubs carved from the trunks of giant trees as you gaze out across central Chile’s Huilo-Huilo Biological Reserve, playing Spot the Puma (or any of the other wildlife species that roam near the Montaña Mágica Lodge—including the world’s tiniest deer, the pudú, which stands about 13 inches tall, like a free-roaming rainforest dachshund).

Nearby, you can play a wild course of mini-golf, where each hole’s obstacle is part of the natural terrain, hike trails, trails and more trails, and brave the longest zip-line in South America (known as “canopy” around these parts), which runs just shy of 1500 death-defying feet.

0
Here we present Australia's 10 deadliest creatures, with expert comment from the naturalist Steve Backshall, author of Venom: a Study of Toxins in the Natural...
Read more
Animals

23 incredibly heart-warming photographs that prove love is all around

24 Pictures That Will Make You Want To Take An Adventure