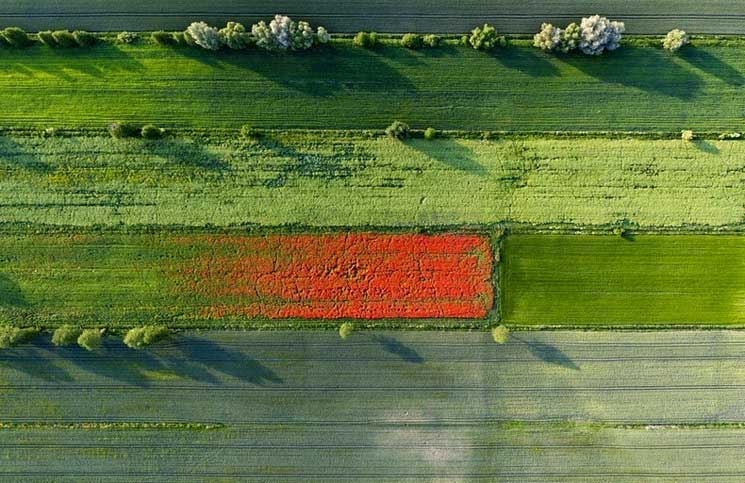 Famed aerial photographer Kacper Kowalski,  featured previously on our website, has taken to the skies again, this time to document the complex relationship between humans and nature. From high up the air, paragliding over the Polish landscape, Kowalski captured where nature and civilization interact in aesthetic, abstract colors and shapes. His aerial photographs are now available, for the first time, in the form of a book entitled “Side Effect”.

In 80 highly aesthetic images, Kowalski depicts landfills and waste spills, snow-covered orchards and autumn leaves. Many of the objects or scenes photographed need some amount of interpretation to understand what it is exactly that’s being portrayed. “Sometimes the pictures resemble drawings,” Kowalski said. “Sometimes they are like maps with traces of human presence on the Earth.”

Kowalski said. “Sometimes they are like maps with traces of human presence on the Earth.” 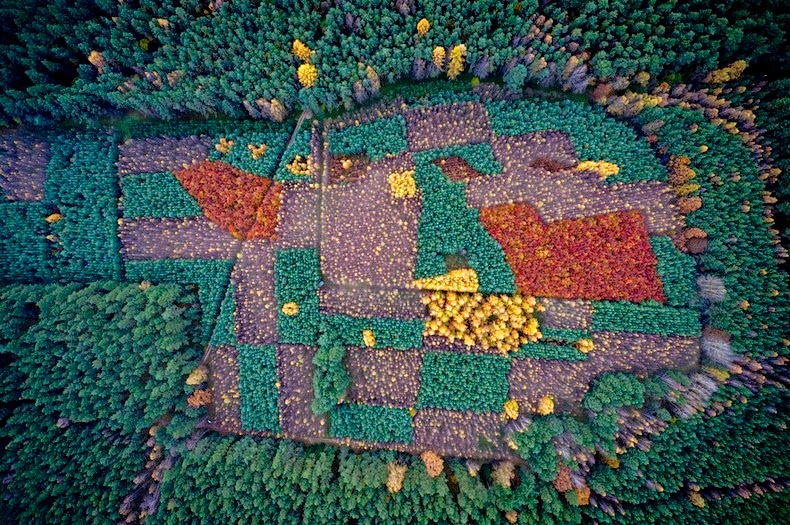 An aerial view of a Polish forest, with trees changing color.

Kowalski doesn’t seem to be averse to human encroachment on nature. “Even forests, meadows and lakes are modified by people,” he said. “On the one hand, it is caused of course by the development of the civilization, economy, etc. But on the other, I think it is an atavism — a need to leave a trace, a visible sign, to immortalize oneself.”
Born in 1977, Kacper Kowalski is a graduate of the Technical University of Gdańsk, where he studied architecture. After having worked in architecture for four years, he devoted himself entirely to flying and photography. Both as a pilot and a photographer, he takes aerial pictures of natural and urban environments of his native Poland. 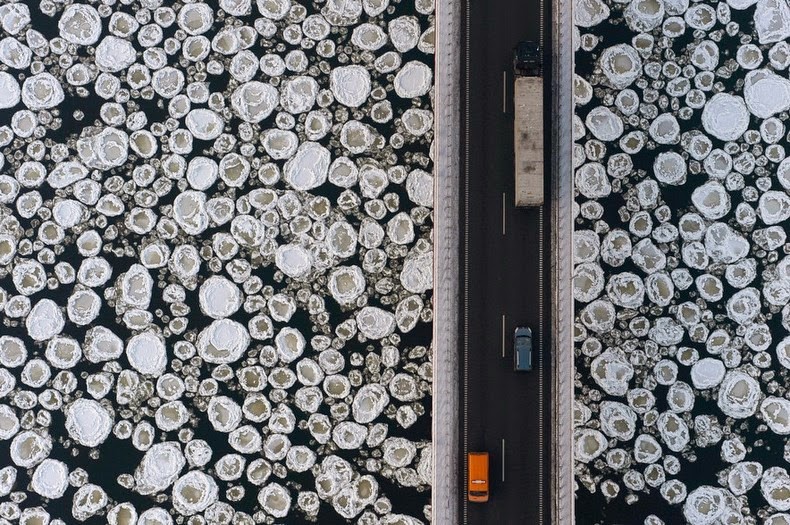 Vehicles travel on a road past the ice-covered Vistula River near Kiezmark, Poland. 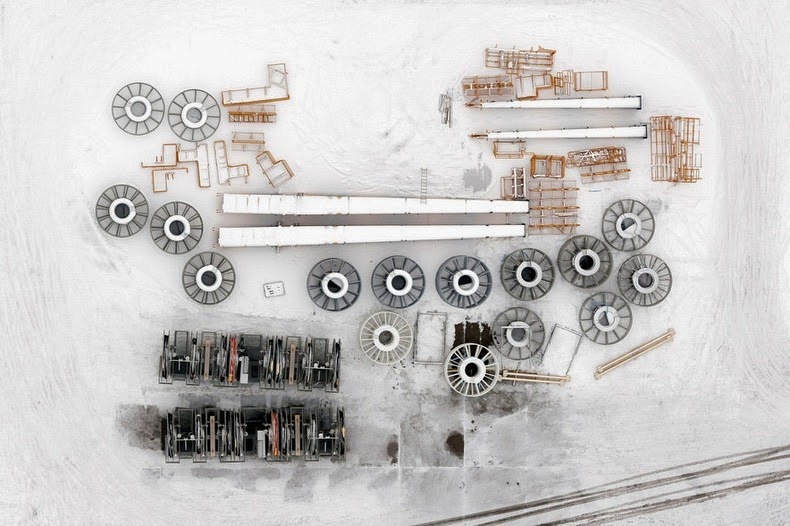 A snow-covered industrial site at the port of Gdynia 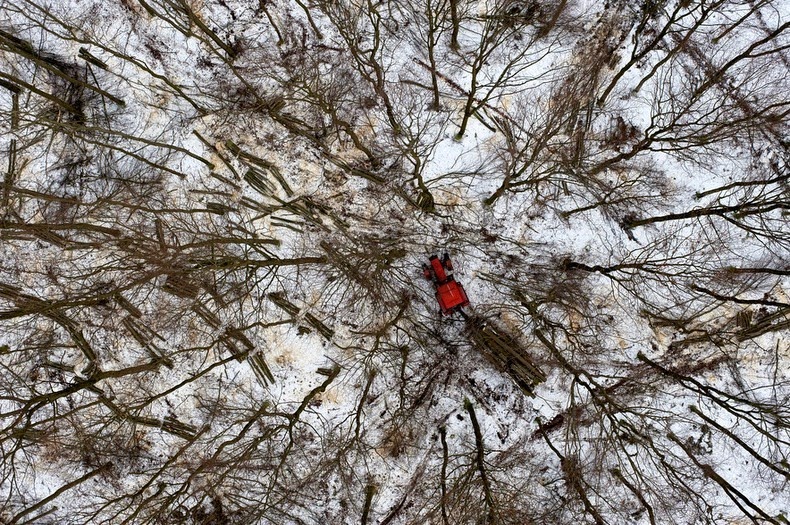 An aerial view of woodcutters in the forest near Gdynia. 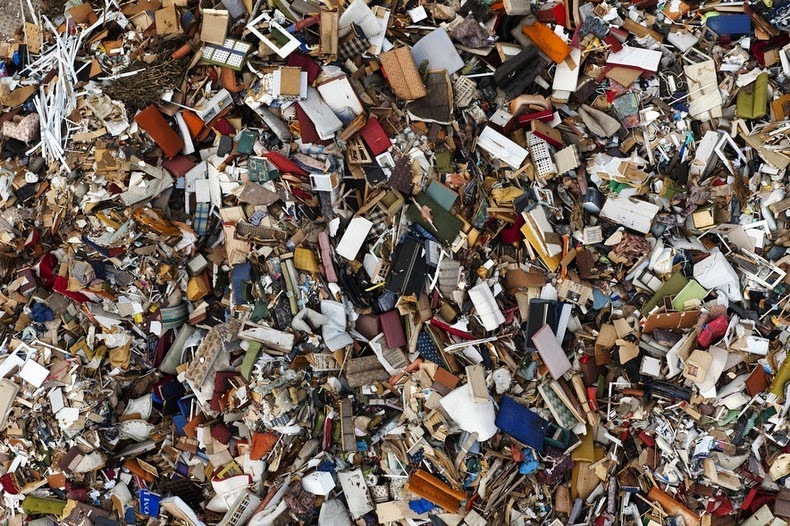 A garbage dump in Gdynia, as seen from above. 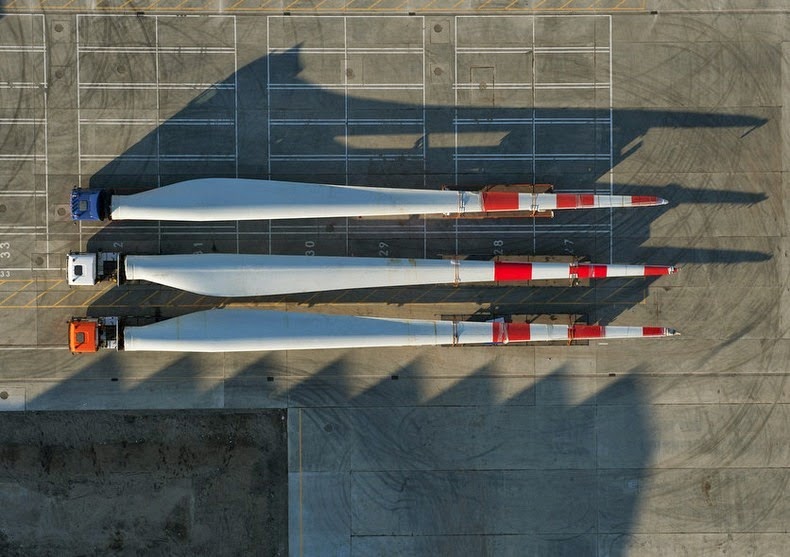 Blades of a wind turbine are set to be loaded onto a ship in Gdynia, Poland. 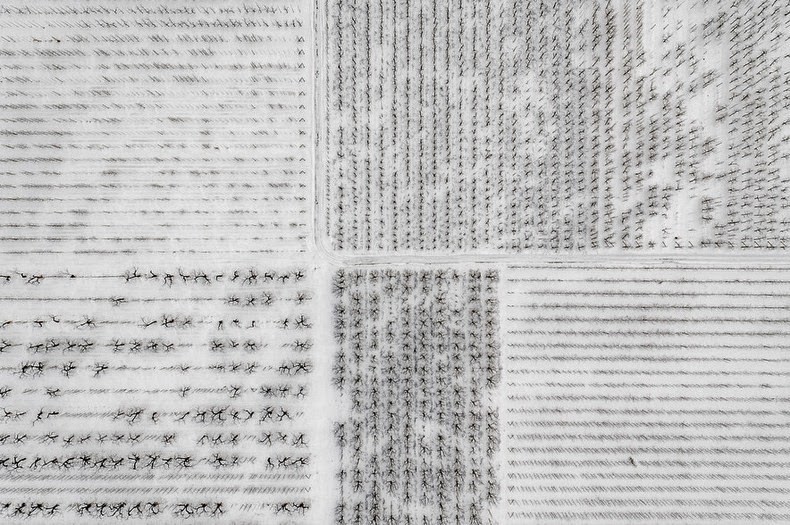 A snow-covered orchard near Tczew, Poland. 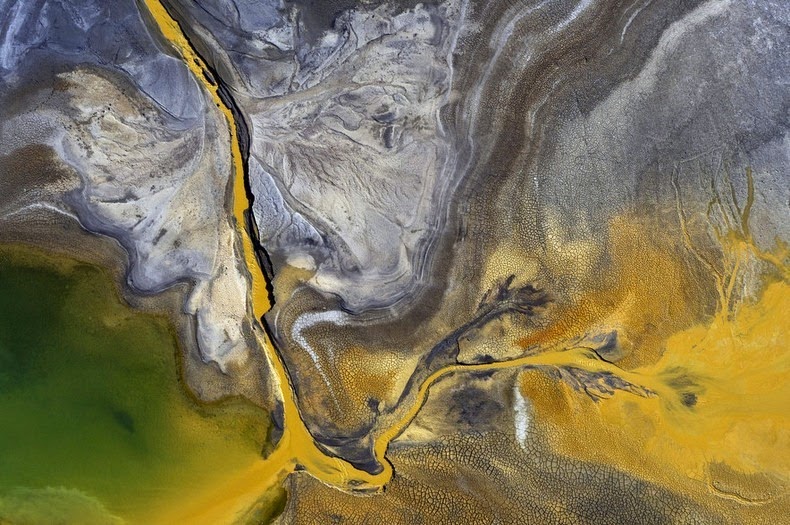 Wastewater is pumped out from the gas-fired Zeran power plant operated by Vattenfall Heat Poland at Bialoleka. 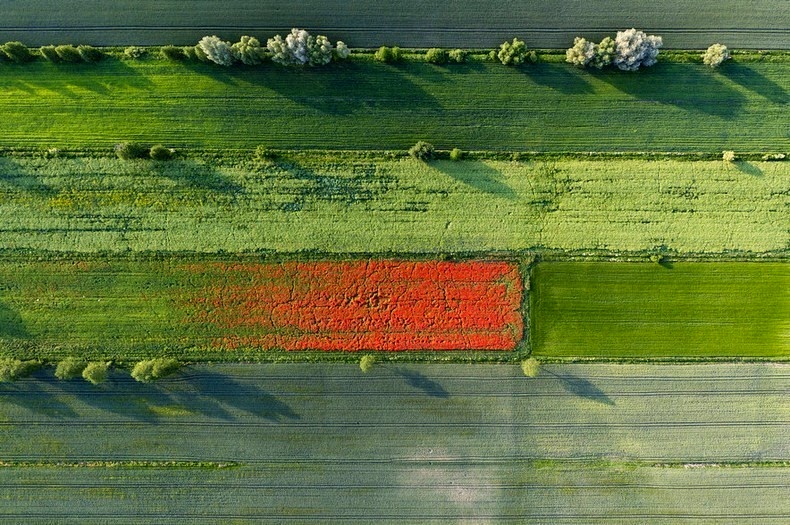 An aerial view over fields of grain shows white chamomile, blue cornflower and other weeds growing amongst the grain sprouts. 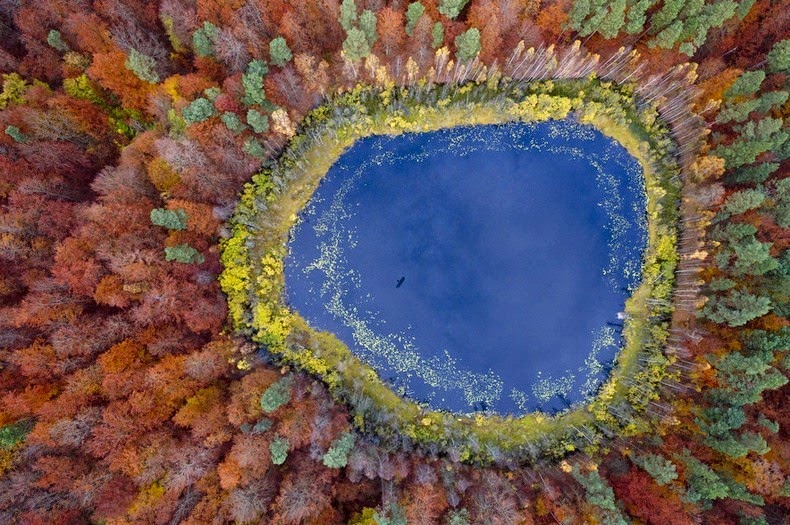 A view over a lake, surrounded by trees changing color in Kashubia, Poland. 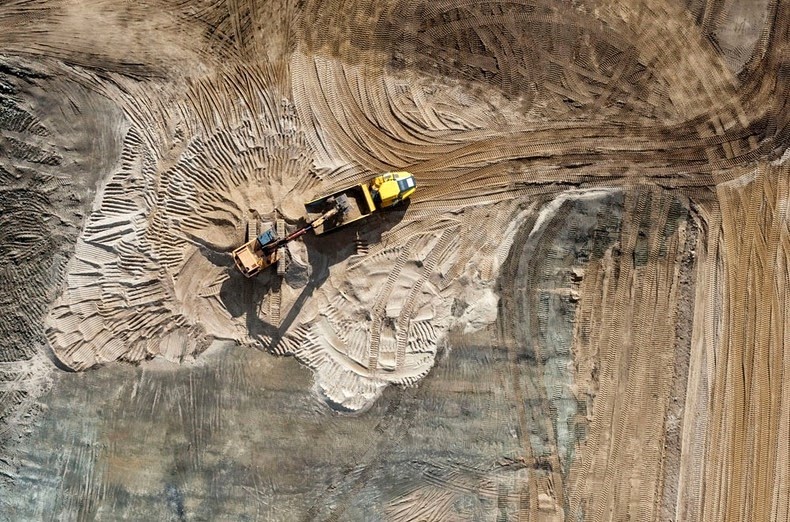 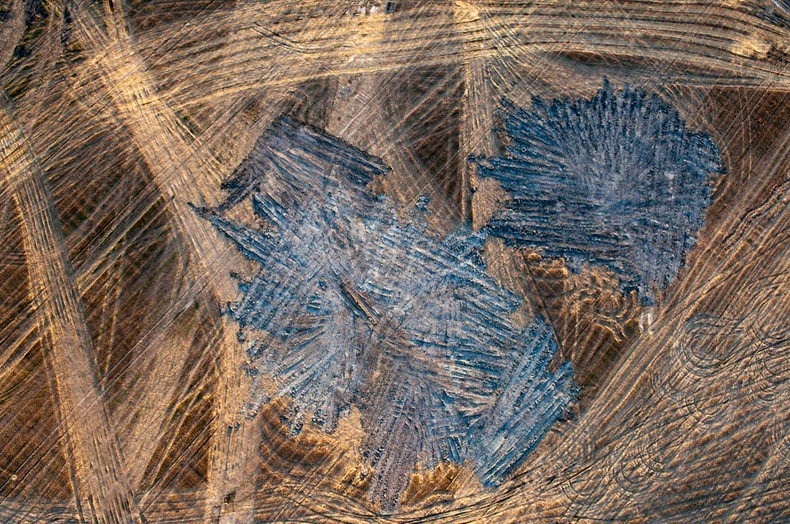 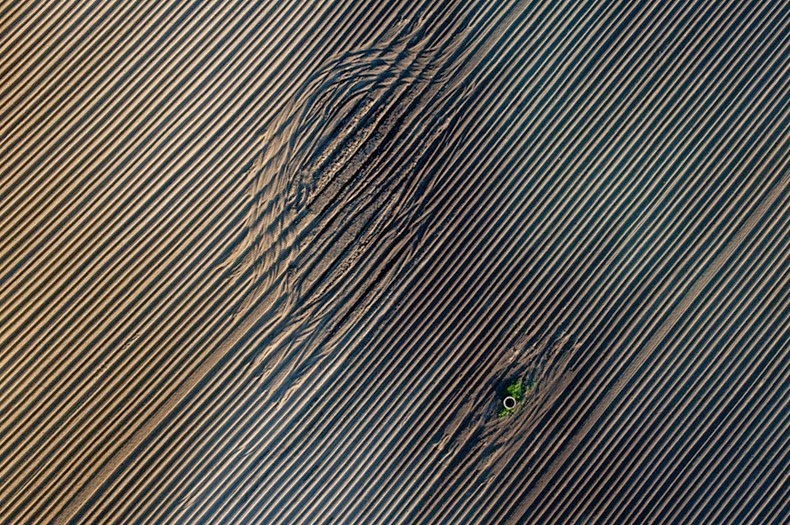 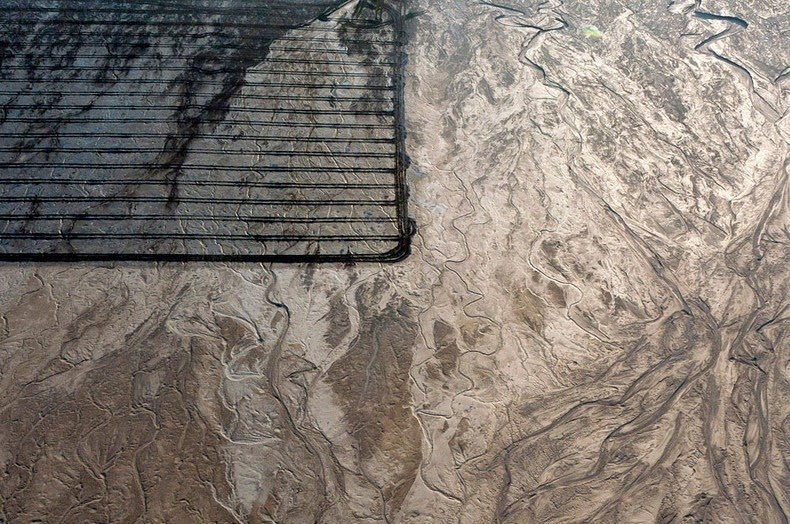 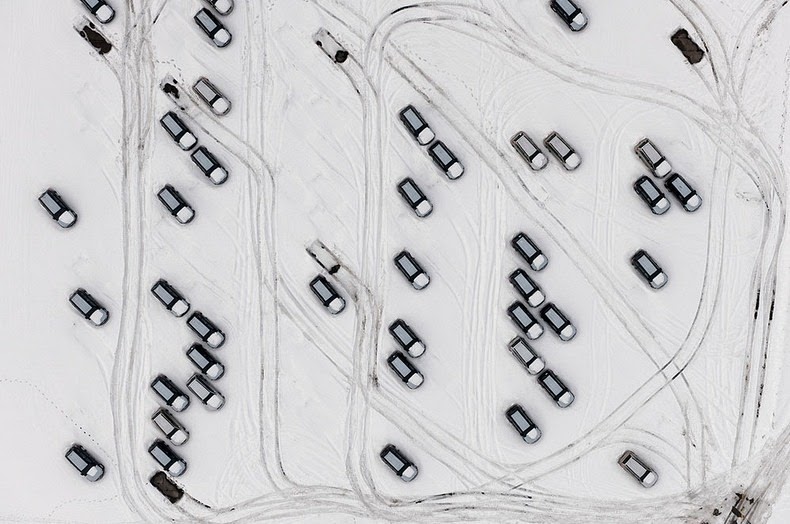 0
It's no secret — 2013 was the year of the photobomb. With time-tested classics like, "Guy walking in front of proposal" and "Zach Braff...
Read more