Home Man's stuff 8 Most Breathtaking Weddings Held Around the World 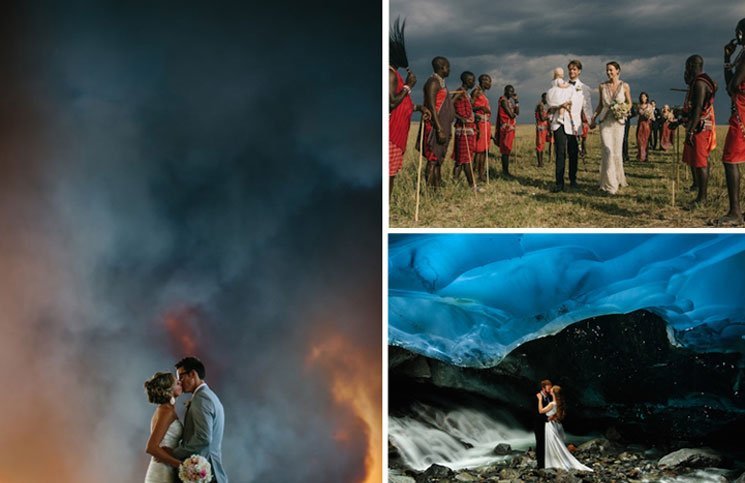 Over the course of six years, we’ve seen some truly breathtaking photos of people being married all around the world. Whether they were standing amongst African wildlife or using nature’s fury as their backdrop, these couples decided to exchange their vows in a time and place they’d never forget.

The result? Each couple now has a set of stunning wedding pictures that are unique and all their own. Forget Photoshop, these are the real deal.

When bad weather was predicted for their wedding weekend, this adventurous couple and their wedding photographer didn’t let that get them down. The Canadian couple and photographer Colleen Niska took advantage of the situation and sought out the dramatic skies before the rain started pouring down. Little did they know they would remember their special day in a much more unique way than ever expected! “We just happened to be at the right place at the right time in good old Saskatchewan, Canada,” Niska said. The lucky shots feature the brave couple standing along a gravel road with a massive tornado whirling in the background.

Anchorage-based photographer Josh Martinez traveled by helicopter to Alaska’s Knik Glacier with an adventurous bride and groom for one unforgettable portrait session. During the photo shoot, the couple frolicked through lush meadows set against a backdrop of snowy mountains, explored icy fields, and even waded knee-deep into a glacial pool of stunningly blue water—ruining the wedding gown in the process. For such incredible photos, we think it may have been worth it!

Redditor Corey Perkins, aka per1993, has just recently renewed his vows to the love of his life in a breathtaking African wedding. After having met his Zimbabwe-born wife of three years while attending Seton Hill University in Pennsylvania (each on an athletics scholarship), the two wed in the United States. It wasn’t until this year that the couple was able to finally fly over to the bride’s homeland and throw a wedding for her family to attend.

It’s part of a wedding photographer’s job to immortalize precious moments while under pressure, but professional photographer Josh Newton’s most recent gig has received national press for its high stakes, burning intensity, and gorgeous results. Newton captured striking and dramatic photos of the newlyweds April Hartley and Michael Wolber set against the backdrop of a blazing wildfire, documenting a wild experience that’s sure to be unforgettable for both the couple and the photographer.

Wedding photographer Eric Ronald captured a photo of a lifetime for one New Zealand couple, Belinda and Campbell. As a surprise for her soon-to-be husband, before the wedding, Belinda arranged for a helicopter flight so that right after the ceremony, the two of them could soar over a lake and land on top of a mountain. Despite the wind that day, the chopper appeared on the horizon and Ronald, the photographer, boarded it along with the couple.

Wedding photographer Jonas Peterson captured breathtaking scenery complete with wandering wildlife when a couple wed in Kenya in the presence of their Maasai warrior friends. The bride and groom spent two years in the area putting together a book about a lion pride, and during the course of the project, they developed close, family-like relationships with the Maasai Mara locals. When the big day came, the couple’s friends hosted the ceremony at a camp on the plains.

Photographer Chris Beck recently captured stunning images of his friends Torsten and Sarah posing in the Mendenhall Glacier ice cave near Juneau, Alaska after their wedding nuptials. To get to the location, the group had to hike over rugged terrain for over two hours, kayak through freezing water, and climb the side of a mountain. Judging from the fantastic photos, we’d say it was worth it, as the couple now has a one-of-a-kind collection of portraits to commemorate their special day. The happy newlyweds look absolutely radiant in the ice cave, with streams of water flowing around them and the surreal blue glow of the glacier above them. Chris Beck’s website

Calgary, Alberta-based photographer Gabe McClintock adds to the recent trend of unique wedding photos with his images of Sarah and Josh, a couple who eloped to the lovely country of Iceland to celebrate their nuptials. While the couple originally planned to have a simple wedding with their family and friends in Ohio, they ultimately made the decision to elope to a faraway, remote location filled with natural wonders.

He Lives in a Lotus Belle Tent. Wait Until You See the Inside!

0
Ever heard of a lotus belle tent? If not, you’re about to be amazed. This man is living inside this gorgeous tent in the...
Read more
Arts

0
Artist Nemanja Pesic was created in 18th July, 1985. Currently he is living and working in Belgrade, Serbia. He is a home taught artist...
Read more
Amazing

Cop Follows Her Instinct And Enters An Abandoned House. What She Finds Inside? Life-Changing!