Home Animals Dog dumped by its owner on a London bus and locked in... 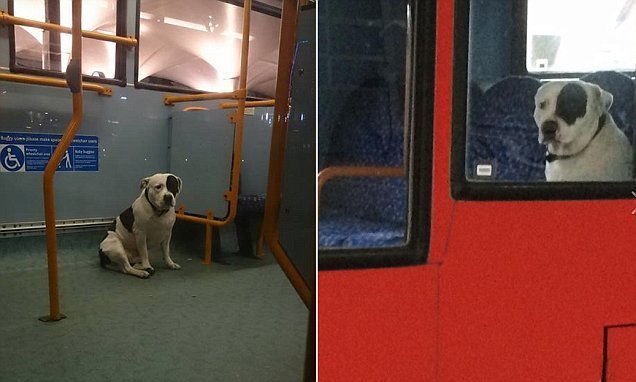 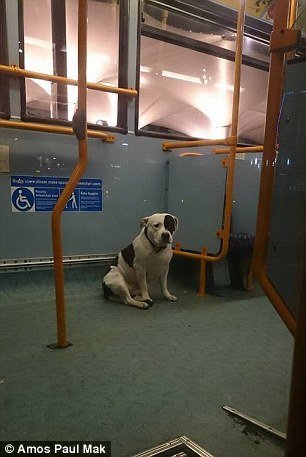 An unwanted pet dog was abandoned and left to ride on a London night bus for up to 10 hours until an animal charity could come and rescue it.
The Staffordshire Bull Terrier cross, appropriately named ‘Buster’ by the driver, was so nervous it was spotted ‘shaking’ on the bus in east London on Thursday night.
Driver Amos Paul Mak, 44, was travelling along Leyton High Road on the 158 route bus when he noticed the sad-looking pooch sitting in the disabled bay.
Mr Amos, from Stratford, east London, then shared the photograph he took on Facebook to try and track down the owner.
He even offered to take ‘Buster’ home, but his employer said he was unable to because of company regulations.
The bus ended up at Stratford Bus Station at around 10pm and the stranded dog then stayed on the bus until the ‘early hours’ because it ‘didn’t want to be moved’.
Mr Amos said: ‘I was driving the 158 bus when a dog came on at around 9.30pm. It looked like it came on with two men, but the pair soon got off.
‘The dog then stayed so I stopped the bus for five minutes and asked on the tannoy if anyone owned the dog, but nobody came forward.
‘Everyone on the bus was quite sympathetic but it seemed like the dog was on its own.’
Mr Amos then finished his route after arriving in Stratford and went over to comfort the lonely canine. 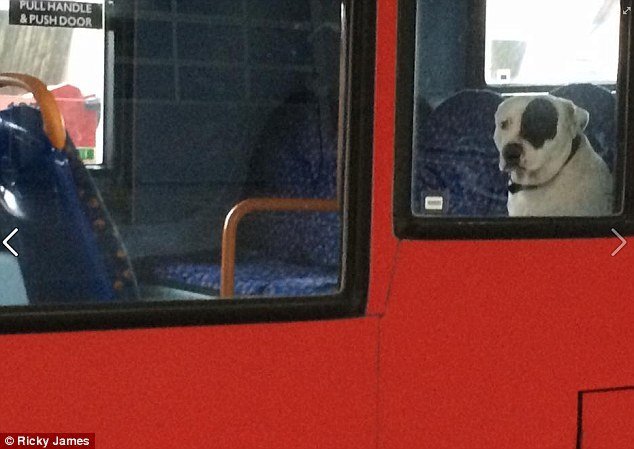 He added: ‘I could tell the dog was starting to become more and more nervous – it was shaking as I was stroking it. But it seemed like it was quite switched on and it seemed like a smart dog.

‘Because the bus had terminated at Stratford, the controller took the vehicle back to the yard with the dog still on it.

‘I offered to take the dog home, but I wasn’t able to because if it had bitten me, I could have sued the company.

‘The dog then stayed on the bus overnight because it didn’t want to be moved. 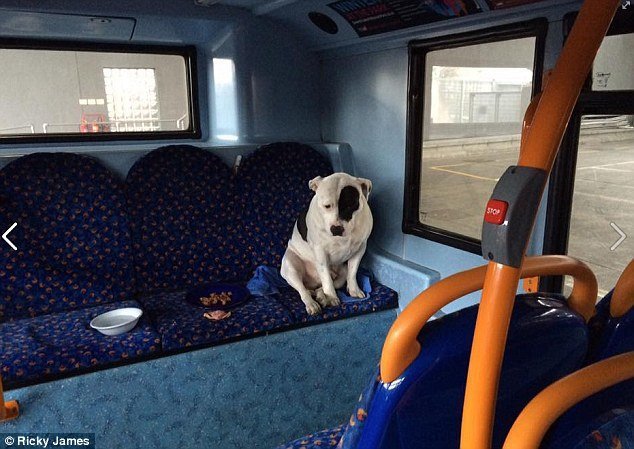 The RSPCA then picked him this morning, I’m not sure when, but the dog could have been on the bus until 8am.

‘I called him Buster because of where it was found on the bus and I think it was around six years old.’

A Transport for London (TfL) spokesman said police and the RSPCA were called but neither were able to come out.

The spokesman said: ‘We then called the police station at Forest Gate, which has a dog pound, but they said it had no space.

‘The bus was taken out of service and taken to the bus garage at West Ham. They tried to get the dog off the bus but it was frightened and would not come off the bus.’

He added the dog was ‘well cared for and kept on the bus’ until this morning when it was collected by the dog warden.

A Metropolitan Police Service said: ‘We were called at 9.30pm to reports of a Staffordshire Bull Terrier left on a bus. We did not attend. TfL then called the dog warden.’

An RSPCA spokewoman said: ‘We were concerned to hear about a dog that appears to have been left on a bus yesterday in the Stratford area.

‘We are grateful to the staff at the bus station for letting us know, and we have advised them to contact the local dog warden as soon as possible.’

8 WAYS TO NOT LOSE YOURSELF IN A RELATIONSHIP

0
Learning how not to lose yourself in a relationship can be pretty hard in the beginning. After all, once you get into a relationship, all you want to...
Read more
Quotes

10 Lessons From Dalai Lama That Will Change Your Life

0
It is not often that Oprah Winfrey is lost for words! Yet this was exactly what happened when she asked the Dalai Lama a...
Read more
Self Improvement

7 THINGS HEALTHY PEOPLE DO EVERY MORNING