Positive Vibes
Home Animals He Pours Water On 4 Rescue Babies. But Look Closely Into Their... 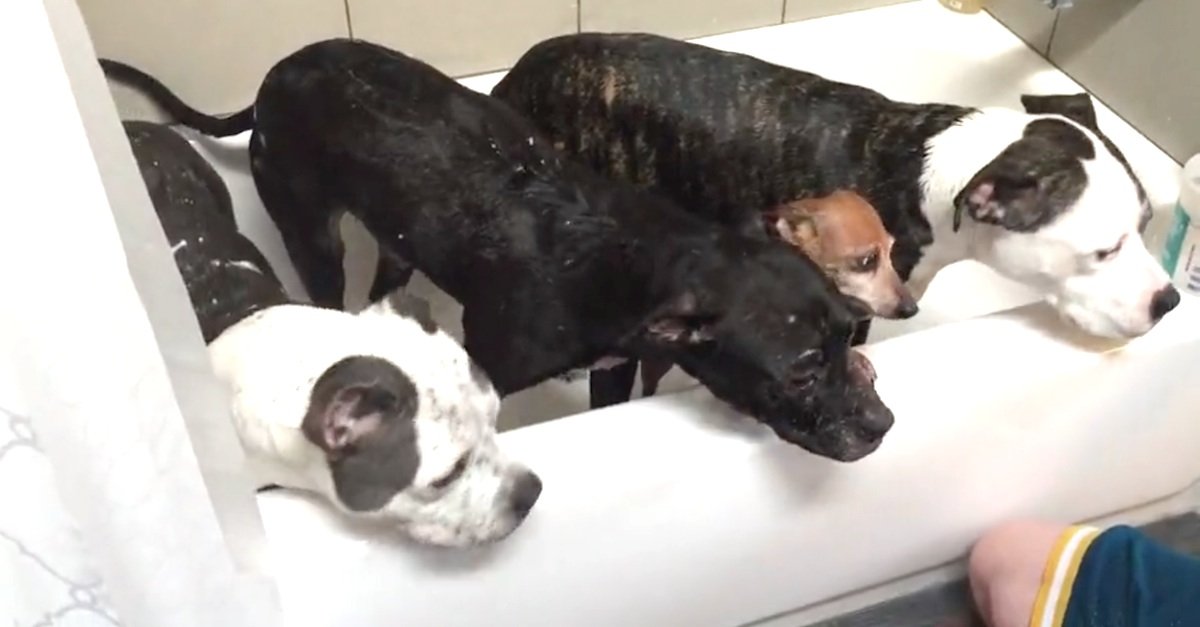 For whatever reason, pit bulls these days are coming with an absolutely horrible reputation. While it’s true that these animals are incredibly powerful, it can’t be stressed enough that the only thing that makes a dog “bad” is if they have a bad human owner!

It really goes to show how loving dogs are, because even when they do have a bad owner who does everything they can to make their dogs fighting machines, they can be brought back and softened up a bit with some good old-fashioned TLC.

These beautiful pit bulls are all rescue dogs. Evan, the biggest, was actually being trained and beaten by horrible humans who had big plans for him to be a top fighter in an illegal dogfighting ring. He was actually a survivor of one of the largest police raids in the history of the United States.

Evan was actually one survivor of 367 other poor dogs who were being bred and trained to fight their own. But even though he was trained to be vicious and bloodthirsty by bad humans, with a little bit of love, he’s finally learned to trust humans again. And alongside his adopted siblings Ivy, Emmett, and Penelope the dachshund, we’re sure that this family will be together for good!

Please SHARE this adorable video if you believe that there aren’t “bad dogs,” only bad humans who make dogs bad! Treat dogs with love, and you’ll have a good dog.

They’re Sitting On The Couch When Suddenly She Hears THIS Song… How Adorable!

0
Daddy And Daughter Perform Adorable Cover Of Justin Bieber’s ‘Love Yourself’ rowing up, I was practically my father’s little shadow. Whether he was out working...
Read more
Man's stuff

0
This concept car Peugeot Shine has been created by Polish designer Piotr Czyzewski, who’s working at the Peugeot, as well as other companies oriented to...
Read more
Amazing

Driver Finds Mom Nearly Frozen To Death On The Road. Then She See’s What’s In Mom’s Car…

0
Driver Finds Mother And 4-Year-Old Nearly Frozen To Death After Car Accident When Tina Dubyts was driving in the blistering cold, it was like something...
Read more