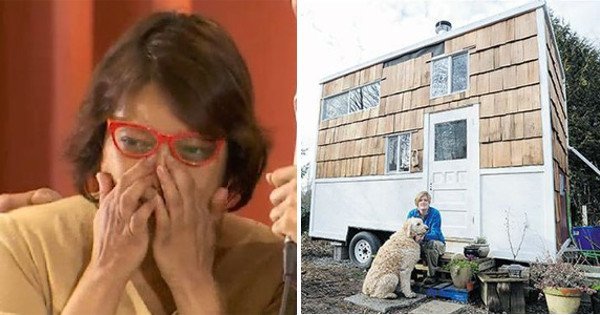 A last-minute Christmas donation has helped a campaign reach its goal and build a homeless mother and her 4-year-old daughter a new house.

Brice Royer was battling cancer and depression when he decided to start spreading goodwill around his community.

He placed an ad on Craigslist offering “unconditional love” in return for favors, so Francesca Murray offered to cook for Brice.

BUT IT TURNED OUT THAT FRANCESCA WAS LIVING IN A WOMEN’S SHELTER WITH DAUGHTER CHARLOTTE AND STRUGGLING TO MAKE ENDS MEET.

So to help Francesca as she had helped him, Brice set up an online fundraising campaign to build a tiny, solar-powered home for Francesca and Charlotte.

THE CAMPAIGN’S TARGET WAS $25,000 TO BUILD THE PROPERTY AND GIVE BOTH MOTHER AND DAUGHTER A NEW LEASE OF LIFE.

People from all walks of life have donated to the campaign. Lou Jenkins from Chicago donated the smallest possible amount, $1, but it was all he could offer. “That’s my last dollar in my account,” he explained, “But I know what it’s like to stay in a shelter.”

Lou’s donation inspired a complete stranger to push himself to donate beyond his comfort zone and by giving $4,500, he helped the campaign reach its target.

“I felt inspired by that man who gave his last dollar,” the stranger wrote on the Fundrazrpage, “He gave 100%. My donation isn’t my 100%, but it’s pushing my comfort zone.”

“GENEROSITY IS CONTAGIOUS. WHAT IF YOU ALSO GAVE OUTSIDE OF YOUR COMFORT ZONE?”

Work will be starting on Francesca and Charlotte’s new home in the new year, starting a “pay-it-forward” housing program for people in need.

You can find out more and donate to the project at the Fundrazr page.

0
Holiday stress can ruin the season, making your parties and presents difficult, rather than fun. But it doesn’t have to be that way! There...
Read more
Amazing

The Moment This Dog Is Reunited With Her Missing Puppies Is Just Beautiful.

0
Rescue workers from the Villalobos Rescue Center in New Orleans, USA, one day received a call that ended in a way they never could...
Read more
Fitness & Health

10 Reasons Why You Have No Energy

0
Are you drained of all energy even though you’ve been sleeping well and appear to be in good health? Being tired all the time is...
Read more