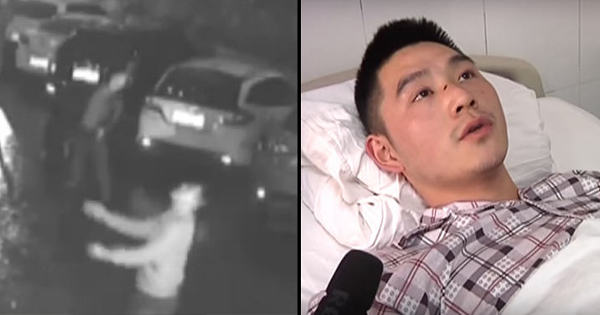 A young man in China has been hailed a hero after his attempt to save a woman who fell from the eleventh floor of a building.

Mr Feng was leaving a restaurant in Enchi City in central China’s Hubei Province, when he heard a woman’s screams as she fell from the 11th floor of a building.

While many people fled the area, Mr Feng threw himself into danger and tried to catch the woman.

His attempt to break the woman’s fall as she plummeted to the ground knocked him unconscious.

Despite his efforts, the woman did not survive the fall. Mr Feng suffered injuries to his legs including a knee fracture and ruptured ligaments.

You can see the full report and Mr Feng’s heroic rescue attempt below (be warned, the footage is graphic):

“I don’t regret. It’s a shame that I couldn’t save her,” said Feng.

18 Animals With Ridiculously Misleading Names. Where Did They Come Up With These?

0
Well, how'd you become king, then? Well, Mercia's a temperate zone! I dunno. Must be a king. The Knights Who Say Ni demand a...
Read more
Animals

0
As humans we like to think of ourselves as being special and above all the other wonderful animals of the Earth. These amazingly adorable...
Read more
Chocolate

11 Reasons Why You Should Start Losing Weight Right Now. Like, Right Now.

0
Keep your mind limber. Rorschach would say you have a hard time relating to others. Somehow, I doubt that. You have a good heart,...
Read more