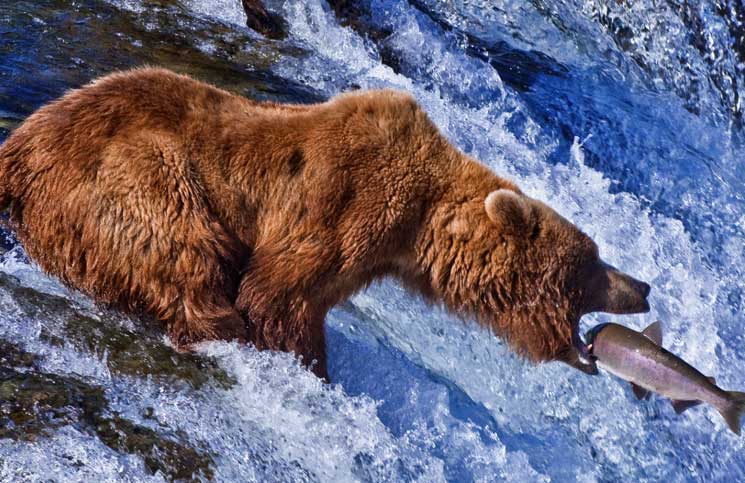 Ah, the great outdoors, how I loathe thee. What with all that sunshine, fresh air, and hordes of ravenous apex predators lurking around every trail bend. But if you do insist on communing with Mother Nature, here’s what you need to know to keep from becoming a part of the food chain.

Since 1890, only 20 people have fallen prey to mountain lion (aka cougars or pumas) predation in the whole of the U.S. and Canada. However, as urban sprawl pushes human homes further and further into big cat habitat, encounters with them have risen dramatically since 1986. And while you’re still more likely to die from bee stings and lightning strikes than from a cougar bite, knowing what to do if you find yourself face to face with a mountain lion could very well save your life:

Don’t run, maintain eye contact. Mountain lions, like many big cats, are ambush predators. Seeing that you see them is often enough to dissuade a cougar from attacking, however, turning your back on it and attempting to run will only entice it further.

Pick Up Your Kids and Pets. Cougars are not dumb, they’ll gladly go for the smaller, weaker target (ie your children or your pets) rather than tussle with a full-grown adult human, especially if the little ones panic and suddenly bolt. So pick up your kid and pet—or at least have them crowd close with you between them and the cat—if you stumble upon a cougar.

Get Big, Get Loud. Unlike bears, cougars prefer not to engage in prolonged fights with equally-sized opponents. It’s therefore your job to convince the cat that you are not one to be messed with. Throw your arms over your head (if you’re wearing a jacket, hold the coat tails above your head like a frilled lizard to look even bigger), start yelling obscenities in a loud but calm voice, bare your teeth, chuck rocks and sticks at it, basically anything to dissuade the cat from considering you an easy meal. But remember, you just want to drive it away. If the cat feels cornered or overtly threatened by your actions, it is likely to attack with everything it’s got because, really, that cougar wants to be dead about as much as you do.

Back Away Slowly: Put some distance and obstacles between yourself and the mountain lion. Slowly retreat from the cat while maintaining eye contact and fighting the overwhelming urge to run. Get inside a building or car if they’re available or just get to higher ground.

Be Ready to Fight: If you notice that the cat’s crouching with its tail twitching and ears erect, that’s not good—the cougar readying to pounce. Now is the time to go on the offensive. And you gotta get straight mad dog up in this sucker if you want to survive: throw rocks (bigger ones than before—aim for the head), grab the biggest tree branch, stick, or ax handle you can reach and start swinging it like a goddamn whirling dervish as you bluff rush towards the cat. If you have a gun, then, seriously, the fuck have you been waiting for? Use it. If not, employ anything at your disposal—cameras, binoculars, fishing poles, even your bare hands—to inflict as much pain as possible before the cat’s claws and canines rip you to shreds. Aim for the eyes, nose, ears, and throat for maximum effectiveness and don’t let up until it’s dead or decides to retreat.

Bears, much like the Wu Tang Clan, ain’t nothin’ ta fuck wit. The North American Black bear averages about 700 pounds while Grizzlies top out around 1,400 pounds. Both species can sprint at 20-30 mph and are strong enough to overturn 300-pound-plus objects with a single paw swipe. Their claws are more than 3 inches long, their canines can chomp through your femur like butter. You will not win in a match against a bear. The old adage about not climbing trees when running from bears, because black bears will climb up after you and grizzlies will simply knock the tree down, is not hyperbole—you might as well be tangling with a Wookie. Bears will ruin your week like none other, so the best defense is to simply stay out of their way.

Let Them Know You’re Coming: Bears generally have little interest in humans as food and will go out of their way to avoid people, so long as they know that you’re there. A large majority of recorded bear attacks over the last century have been due to hikers and campers unwittingly stumbling upon a bear feeding or stepping between a mother and its cub. Therefore, you should avoid traveling through bear country alone. Move in groups of two or more and make noise as you travel by singing or talking loudly.

Appease, Appease, Appease: If you do somehow manage to stumble upon a bear while it’s feeding, you’re going to have to play the situation very carefully to get out with all of your limbs intact. Bears will often display a number of defensive warnings before attacking, including popping its jaws or swatting the ground while blowing and snorting at you. If that doesn’t work, it may “bluff charge” you (rushing forward but stopping short of your reach) in an attempt to drive you off. This is the bear’s way of saying, “bad kitty, that’s my pot pie.”

Your response needs to be, “Oh hey cool, my bad. Pay me no heed, I’m leaving.” Do this by making yourself look as non-treatening as possible. Avert your eyes (bears, like their canine cousins, consider eye contact a challenge), slump your shoulders, get quiet, calm, and still. Slowly pull out your can of bear spray (whaddya mean you’re hiking in bear country without bear spray, are you stupid or something?) and keep it at the ready as you slowly back away. Once you’re clear of immediate danger, hightail it out of the area the same way you came in.

When to Use the Spray: If your appeasement strategy fails as hard as the Munich Pact did in ’38 and the bear continues its advance, it’s time to use your bear spray. Address the animal in a firm voice then, when it gets within 20-30 feet, aim the spray nozzle just above its head and give the trigger a long pull. Aim to get as much of the aerosol in its eyes and nose as you can. That should be enough to dissuade the bear. Now, if the bear keeps attacking (a sign that it’s not simply being defensive but now views you as a meal), use whatever strength you have left to inflict as much damage as you can to its eyes, nose and ears with the hardest, heaviest, and sharpest items at your disposal.

When to Play Dead: If your spray did nothing but piss the bear off further and it makes physical contact with you, play dead. Don’t bother running, these animals can outpace Usain Bolt over short distances. Lay on your stomach with your hands over the back of your neck, keep your elbows and knees wide to avoid getting flipped onto your back, and just wait. Wait for the bear to stop attacking, wait for it to leave. Do not move until you’re sure the bear has left the area, even if that means laying there for a half hour or more.

Unlike solitary cougars and bears, wolves pose a difficult challenge given that they’re pack hunters. If you see one wolf, you can be sure there are at least few more already circling behind you. Still, wolf attacks are exceedingly rare in the U.S., with less than 50 attacks reported since 1942.

Show Your Dominance: Use their pack mentality to your advantage. If you find yourself face to face with a wolf, make yourself look as big, as tall, and as menacing as possible. Yell, throw rocks, and be aggressive to show the wolf you are not one to be taken lightly. But, again, don’t make eye contact—that will only make the wolf angry. Use your bear spray or gun if you have one, otherwise the whirling dervish method described above can be quite effective as well.

Get High: Thankfully, wolves can’t climb trees. If you find yourself cornered by a pack of snarling beasts, hightail it up the nearest tree. Just don’t run—wolves will instinctively give chase as they would any other fleeing prey. If you are in a group, stay on the ground and put the kids in the center of the defensive ring with armed adults positioned around them.

And remember, dogs are the borked versions of wolves. Even the biggest Rottweiler’s bite force pales in comparison to the 400-plus psi that a wolf’s jaws can produce, so don’t go thinking you can pull some Liam Neeson The Grey bullshit and fight a pack off with some broken single-serving liquor bottles.

Despite what films like Jaws and Sharknado suggest, shark attacks on humans are also exceedingly rare. The year 2000 saw the most shark attacks in recorded history with only 79 incidents—that’s all shark species, worldwide. And as with bears, the best way to avoid being bitten by a shark is to stay the hell away from sharks.

Know When It’s Safe to Go Into the Water: Don’t ignore posted warnings that sharks have been spotted offshore of your favorite beach. Also, use the buddy system and ever don’t swim alone, especially when sharks are most active in the twilight hours and just after sunset. Stay close to shore, avoiding steep the drop-offs of sand bars where sharks prefer to lurk.

Don’t Be a Target: Don’t go swimming if you’re menstruating or have open wounds, and don’t pee in the water—these are all homing beacons for hungry sharks. Sharks are attracted by both scent and the minute electrical pulses your muscles generate. And like many fish, they instinctively snap at shiny, sparkly objects. So if you’d like to keep your fingers, leave the flashy jewelry and bright clothing on the beach.

Show that Leopard Shark Who’s Boss: If, despite your best efforts, you are attacked by a shark, first back yourself up against a reef or other barrier so that the fish can’t circle around behind you. Next, aim as the shark closes in, and punch that fucker as hard as you can right on the point of its nose. Shark’s noses are packed with sensitive sensory organs and four or five short, sharp jabs are often enough to convince it that you aren’t worth the effort. If that doesn’t work, aim for the eyes and gills. If that doesn’t work, get the dynamite.

While few people would consider Australia’s largest flightless bird to be any particular threat, Cassowaries come armed with 3-inch-long Velociraptor-style dew claws which they can use to great effect to disembowel anything they view as a threat. These birds can grow up to 150 pounds, stand 5 feet high, and apparently all know kung fu because they will readily charge, kick, push, peck, jump on, and head-butt in defense of their chicks and territory. As such, don’t ever attempt to approach or feed these birds and keep both your kids and your pets on a short leash when hiking through the Australian and New Guinean outback.

0
How long could you keep holding on to a relationship knowing that your spouse or partner has already fallen out of love with you?...
Read more
Photography

0
The bitterly cold weather that currently has much of the East Coast of America in its icy grip has demonstrated its chilling intensity by...
Read more
Photography

0
"Angry Birds" one the most addictive game and also declared one of the biggest hits in the last 2 years has inspired Sylvia Tues...
Read more