Home Amazing Tiger Is Still Friends with Goat Who Was Given to Him as... 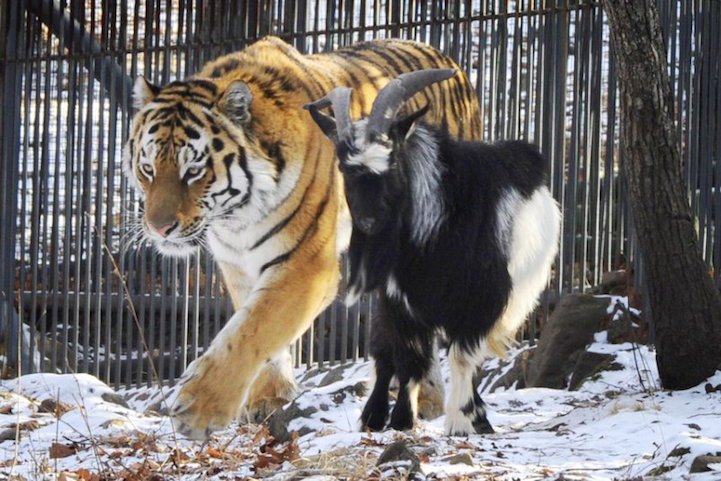 Amur the tiger and Timur the goat (who was initially meant to be Amur’s live food) became fast friends in late November and—despite what many predicted—the two are still amicably living together. At Russia’s Far East Safari Park, the uncommon duo spend their time playing with one another as they enjoy a game of hide-and-seek, hunt together, or butt heads for fun. Surprisingly, they remained friends after Timur evicted Amur from his shelter during a rainstorm. Under all circumstances, this pair has stuck together—even as Amur continues to display his predatory instinct. “We still feed Amur live prey twice a week, but we don’t give him goats anymore out of respect for Timur,” zoo director Dmitry Mezentsev told BBC.

Now, the question is: what’s stopping Amur from eating the goat who was meant to be his dinner? According to the tiger’s caretakers, it all has to do with Timur’s bravery. Since the goat wasn’t taught to be afraid of tigers, he didn’t display cowardly behavior when he was put in Amur’s cage. “The tiger was confused and gave up,” Mezentsev told Observer. “It happened once before, another goat pushed back and the tiger decided not to eat him, but once he showed weakness—that was it—his predator killed him. The situation now is different and the animals are great friends.”

To document this remarkable relationship, the Far East Safari Park plans to install 16 cameras for a live stream. Filmmakers Eleonora Lyubimova and Sooyong Park are also fascinated by the tiger and goat’s friendship, which is why they’ve filmed documentaries featuring the two creatures. Based on the coverage Amur and Timur have received thus far, it seems as though they’ve become a worldwide symbol for finding harmony despite differences.

Right now, it’s anyone’s guess how this all will end. Whether Amur and Timur go down in history as the tiger and goat friends who never killed each other, or the whole thing ends with Amur licking his lips, the story of Amur and Timur, two animals in a small Russian zoo, is now reaching all corners of the Earth.

Cashier Is In Tears When This Mom Used Her As An Example Of Failure. Then The Manager Came In & Did This.

30 Incredible Photos that you won’t believe are Real

0
You don’t need to be a professional photographer to take a truly unique picture. A really creative image is singled out because it was caught at the right moment — whether it’s lightning, a cute...
Read more
Self Improvement