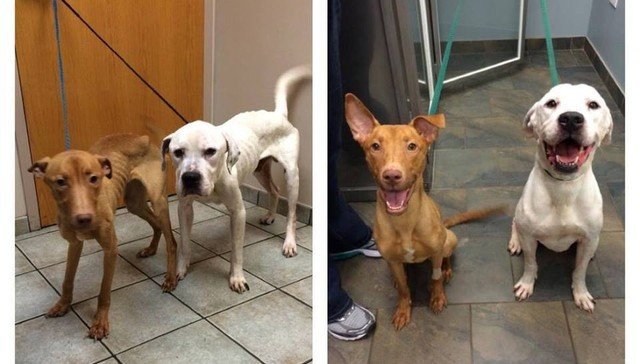 Double the rescue, double the joy — that was the case for two dogs named Oscar and Emmy, who the Chicago Police Department found in an abandoned building back in July.

Oscar and Emmy were dangerously underweight and in need of emergency medical care, so the police called in a local rescue group, Trio Animal Foundation, to help.

These before-and-after shots show how a little bit of love can do wonders! They both looked like walking skeletons, so the vets had to give them a special diet

Soon, Emmy was adopted by one of her vet technicians, Anthony Oscar got in shape too, but he is still looking for a forever home! 0
Sleep, we all love it, especially when you wake up from a great night’s sleep. In the past, sleep was often ignored by doctors...
Read more
Amazing

Wait Until You See Whose Lap This Lil Lion Is Snuggled Up On. Oh My Gosh, Bless His Heart!

0
No one likes to think about growing old and ultimately dying, but it’s something we should all keep in the back of our minds...
Read more
Photography

0
"Children are the living messages we send to a time we will not see." ~ Neil Postman   ...
Read more