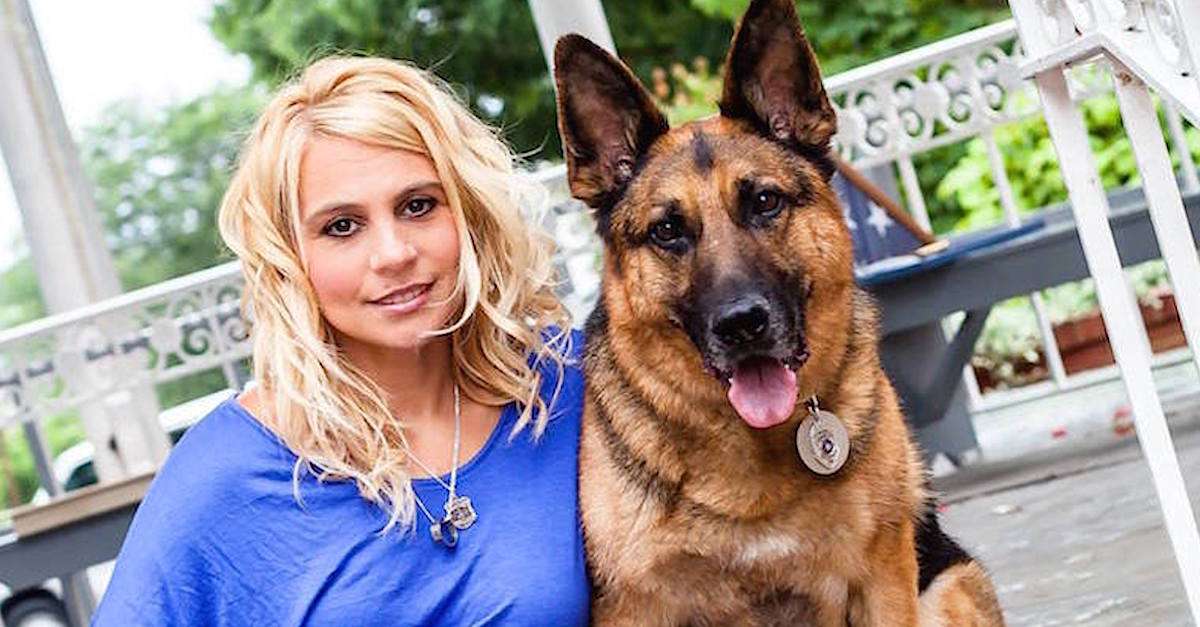 Mary Beth Eslary gave her husband, policeman Eric Eslary, a big hug and kiss before he headed out to work.

Unfortunately, this would be the final time they would say “I love you” to each other. Early that morning, Eric was hit by a drunk driver as he sat in his patrol car. He died an hour later in hospital, leaving behind his loving wife and six children.

At the time of the accident, Eric was out driving together with his police dog and best friend, the german shepherd Blek. Although Blek was seriously injured in the accident, he refused to leave his partner’s side. When Mary Beth arrived at the terrible scene, the 6-year-old dog stayed close to Eric’s body. Surgery succeeded in helping Blek recover despite his serious injuries that nearly led to his paralysis.

While Mary Beth deeply mourned the loss of her husband and the father of her children, Blek’s presence was comforting. This is where the story takes an unexpected and very beautiful turn.

In May 2015, police officer Eric Eslary was killed after a drunk driver collided head-on with him as he sat in his parked police vehicle. He left behind his wife Mary Beth and their six children.

Eric’s partner, police dog Blek, was also in the car at the time of the incident. He was seriously wounded but miraculously survived.

Blek refused to budge from his partner’s side. It was only when Mary Beth arrived that the 6-year-old German shepherd could be dragged away.

Following the tragedy, Mary Beth decided to adopt the police dog and bring him home. Having Blek around helped her remember and honor her husband’s memory.

Eric had served for 17 years as a policeman in western Pennsylvania. He had helped to train the police dog and was very proud of his efforts.

Mary Beth works at a 911 monitoring station and despite her many years of training to deal with stressful situations, nothing could prepare her for the loss of her husband.

“It’s a great comfort to know that I have Blek with me, that way I at least have a small part of Eric with me,” she says.

At times, Blek continues to look for Erik – he sniffs around and waits for her best friend to return home.

City Police held a ceremony to honor the loyal dog’s retirement from the force. Now Blek’s sole mission is to love and give peace of mind to his owner’s family.

Mary Beth and her husband always said “I love you” to each other, before he left for his job. “It was a rule we had. We always said so because you never know what can happen.”

Eric was laid to his final rest alongside the images of his wife and children. Thousands of mourners joined his funeral ceremony.

“It is an honor to take care of Blek, Eric,” said Mary. “I need him. The children need him. We as a family need him.”

What an incredibly beautiful tribute to Eric by Mary Beth and Blek! It fills my heart with hope and warmth when I see how Blek got to live with Mary Beth and her children. It’s amazing what dogs can do for us humans. Blek acts as a constant and beautiful reminder of their hero in heaven.

Please share these moving photos to help honor Lt. Eric Eslary and all other police officers and police dogs that put their lives on the line for our sake.

7 WAYS TO FIGHT FAIR IN YOUR RELATIONSHIP

0
Learning how to fight fair isn’t easy. I know that I have to back track a lot and reel myself in so that I fight...
Read more
Nature

10 incredible and mysterious places around the world untouched by mankind

0
There are beautiful places on Earth that have never been visited by human beings. Few people realize today that these are places that are...
Read more
Amazing