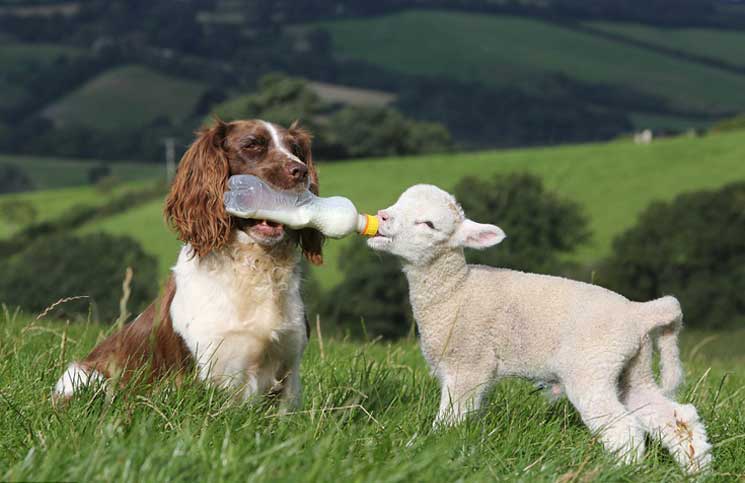 Despite their differences, these adorable animals have made the best of friends with other species.

Source: reddit.com
Bubble the elephant was adopted by the Myrtle Beach Safari in 1983. Bella the lab was left there in 2007 by the contractor hired to build a swimming pool for Bubble. Their mutual love of the water brought them together and they are almost inseparable today.

This dog taking care of a baby opossum.

Source: dailymail.co.uk
Thelma, the elephant, lost its mother and was taken in by a South African wildlife rehabilitation center where she was introduced to her new friend, Albert. After a rough first day together, with Thelma chasing Albert around the enclosure, the two became best of friends when Thelma figured out how to control her weight.

Source: dailymail.co.uk
Shrek the owlet was taken in by the head falconer at an animal center. His greyhound puppy, Torque, took to the owl soon after and cared for her. They now enjoy hanging out together on the couch and watching TV.

Bambi and Thumper in real life

Source: dailymail.co.uk
A woman found a fawn alone by the side. The baby’s mother had unfortunately been struck by a car. After a few days, the fawn became friends with the woman’s dog and cat. Then, she settled on her best friend, the family bunny, Ben.

Kangaroo kisses for the dog

This adorable little fawn was wandering alone in the woods for three days. That’s when a neighbor’s dog, Kate, decided to step in. She started to care for the fawn, who would be named Pippin, and the dog gave the family no choice but to take in the fawn.

Koko and her kittens

Source: koko.org
Koko the “talking” gorilla is perhaps the most famous adoptive parent. She has had several cats as pets during her 40 years at the Gorilla Foundation in California. When her first kitten died after being hit by a car, Koko expressed her sadness to researchers using sign language.

Source: msn.com
Australian dog breeders took in a lamb after it was rejected by it’s mother. Zoe, their dog, adopted the lamb soon after. It’s thought that the dog mistook the lamb for a dalmatian puppy.

Pig parkour off his dog friend

Cat, dog, and ducks having a cuddle party

Source: animaltalk.us
In China three lion cubs were abandoned by their mother and were cared for by a dog. Using female dogs to care for unwanted cubs is common in China.

Rooster with his doggy friend

Source: dailymail.co.uk
Source: tumblr.com
Jess the dog lives on a sheep farm and helps her owner feed the orphaned sheep. She not only helps out by feeding them milk three times a day, but also carries around food buckets.

Source: dailymail.co.uk
This unlikely duo met at a reserve for endangered animals in South Carolina, when Roscoe the blue tick hound, a former stray, followed workers to the reserve. He was later found playing with Suryia the orangutan. Gathering world wide attention, they have appeared in National Geographic magazine and on Oprah Winfrey.

Source: dailymail.co.uk
Taken by police during a drug raid back in 2001, Baloo the bear, Leo the lion, and Shere Khan the tiger have been living together as pals ever since in an animal rescue center in Georgia. Even though in the wild they wouldn’t be friends, they are very happy together.

Source: reddit.com
When four hedgehogs lost their mother, the orphaned babies found themselves in a dangerous predicament. Luckily, this mama house cat took them in as her own, and nursed the little guys back to health.

Source: oregonzoo.org
Chendra the Asian Elephant goes on morning walks at the Oregon Zoo and likes to visit Gus the sea lion.

Shakira taken in by dogs

Source: dailymail.co.uk
Shakira is a seval (an African wild cat) that was rejected by her mother at a zoo in Germany. A friend of the zookeeper took the kitten in when it was only 14 days old and his Rhodesian ridgeback quickly accepted it along with its puppies.

Sox the cat and Liab the lamb

Source: reddit.com
Liab was the smallest of three lambs and was sadly rejected by his mother. That’s when Sox had the heart to take over. Now all grown up, Liab is back out on the farm with his family, thanks to the care of the family cat.

Duck shares his food with the fish

Source: learningfromdogs.com
Clarence the dog plays with Cindy the alpaca in Goeming, Austria. The two have lived together on the farm since they were 3 months old.

Source: today.com
Source: gifki.net
Bonedigger the lion has been friends with the dachshunds for five years now. Joe Schreibvogel, an animal expert with the Garold Wayne Zoo in Oklahoma, introduced his four dogs to the lion when he was just a cub and they have been sharing meals and napping together ever since.

This kitty should be eating the rat, but instead gives him a hug

Source: thesun.co.uk
An orphaned monkey was being picked on by the other primates at a zoo. The zookeepers let Tiger Cup (a dog not a tiger) help protect him.

The duck and dog of Paris

Cat and duck going for a stroll together

Source: avaxnews.net
A wild macaque male monkey took in and cared for a deserted orange kitten. The monkey has been seen in the forest taking excellent care of the cat by nuzzling and grooming it. The first spotting of the monkey and it’s kitten was at the Monkey Forest in Bali, Indonesia.

If only humans were so kind to others that looked different than themselves.

0
Do you ever get frustrated that the world seems to be on a downward spiral? It’s easy to feel helpless in the face of...
Read more
Amazing

0
A waitress from North Carolina claims she was left a bible verse instead of a tip earlier this week. Alexandra Judd was working at Zada Janes...
Read more
Animals

Puppy Watches Dad Fill His Food Bowl. What He Does Before Eating Completely Melts My Heart