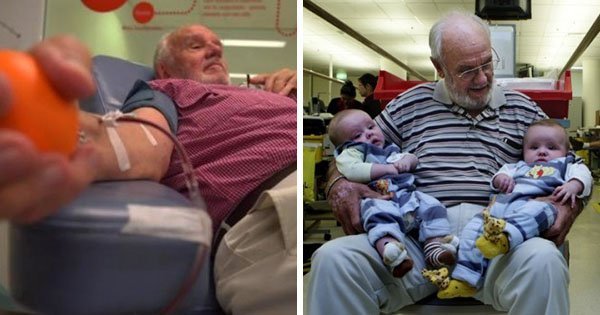 That is quite literally the case for James Harrison, a 78-year-old from Australia’s central coast, who has saved 2 million Australian babies by donating his blood plasma.

In 1951, at 14 years old, Harrison had a chest operation during which one of his lungs was removed. After the surgery, his father told him that while on the operating table, Harrison had received 13 liters of blood from a total stranger, saving his life. He vowed to become a blood donor himself when he came of age.

Aged 18, Harrison began donating blood every few weeks and over the course of 60 years he has donated more than 1,000 times. But that’s not all.

Soon after he started donating, doctors discovered that Harrison’s plasma contains an antibody that stops babies dying from Rhesus disease, a potentially fatal form of severe anaemia where antibodies in a pregnant woman’s blood destroy her baby’s blood cells.

At the time, thousands of babies were dying each year in Australia from Rhesus disease. The newborns that survived sustained permanent brain damage because of the condition.

Dubbed the “man with the golden arm”, Harrison’s blood donations have allowed countless mothers to give birth to healthy babies.

But despite being a regular at donating, there is one thing that will never change.

Harrison’s plasma has also led to the development of a vaccine called Anti-D. As a matter of fact, every batch of Anti-D in Australia has come from Mr Harrison’s blood.

One mother who benefitted from Harrison’s donations is Joy Barnes, who works at the Red Cross Blood Bank in Sydney. Barnes had miscarried at four and five months before having treatment.

She’s known Harrison for more than 20 years but only recently told him of her story. “Without him I would never have been able to have a healthy baby,” she said.

In fact, Harrison’s blood is deemed so special that his arm is insured for one million Australian dollars.

Another mother he has helped is his own daughter, Tracey, whose son was delivered without complications thanks to her father.

She said she was proud of her father for continuing the cause, even after the death of his wife following 56 years of marriage. Harrison said: “I was back in hospital giving blood a week after Barbara passed away.”

“It was sad but life marches on and we have to continue doing what we do. She’s up there looking down, so I carry on,” he added.

Real heroes aren’t the ones that wear capes and fly. They’re the ones who spend their whole lives putting other people’s needs over their own. And James Harrison is one of them.

0
The best way to cheer yourself up is to try to cheer somebody else up. We made a collection of Moments of pure happiness....
Read more
Photography

0
I am so full of love right now, it is welling up in my eyes and threatening to spill out in the form...
Read more
Breads

These Mysterious Photos Of Twins Are Oddly Haunting. They’ll Stay In Your Memory.

0
But with the blast shield down, I can't even see! How am I supposed to fight? Don't be too proud of this technological terror...
Read more