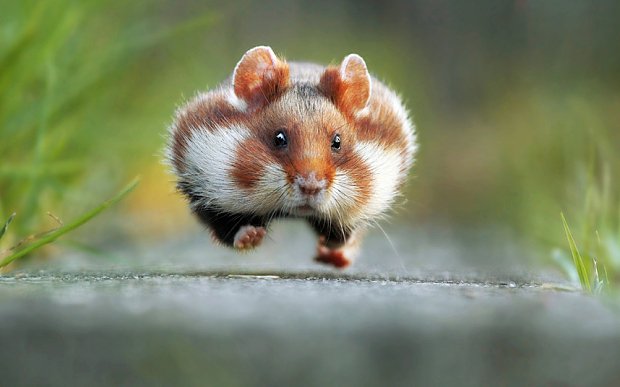 The above image of a wild hamster, cheeks filled with food, expression of quiet determination writ large across its furry brow, has been named the funniest animal photo of the year at the inaugural Comedy Wildlife Photography Awards.

The hamster, or rather Julian Rad, the Austrian who captured it, beat hundreds of rivals to the top prize, earning himself a one-week holiday in Tanzania and a Nikon D750 camera in the process.

Second and third place went to a pair of Britons: William Richardson, for his photo of an impeccably camouflaged stag in Richmond Park, and Oliver Dreike, for an image of a gorilla that swears it was just scratching its nose. Honest.

Given that the award is in its first year, the number of entries – more than 1,500 – was impressive, as has been its global reach, with those entries coming from as far afield as Iraq, Macedonia, Uruguay, Belize and Sri Lanka.

Images of animals looking foolish clearly hold a special place in everyone’s heart – regardless of nationality.

Among the judges were Hugh Dennis, the actor and comedian best known for his role in BBC’s Outnumbered, and Kate Humble, the broadcaster and regular contributer to Telegraph Travel, as well as several respected wildlife photographers, such as Will Burrard Lucas and Tom Sullam.

“It was a pleasure to judge the inaugural Comedy Wildlife Awards,” said Hugh Dennis.

He added: “The number and quality of the entries was fantastic. The finalists should be very proud of themselves, as should the animals they photographed, simply for looking so funny. Sadly there is no way of telling them.”

In addition to being extremely entertaining, the awards aim to raise awareness of the work of The Born Free Foundation, the conservation and animal rights charity.

For more on the awards, see comedywildlifephoto.com.

0
This college student built a £10,000 tiny home instead of living in a dorm Before enrolling at University of Texas at Austin, design major Joel Weber...
Read more
Photography

Norway – The Land of the Midnight Sun

0
Norway is undoubtedly one of the most beautiful places on Earth. It's home to more natural wonders than we can count and it has...
Read more
Positivity

10 Things To Stop Caring About Today