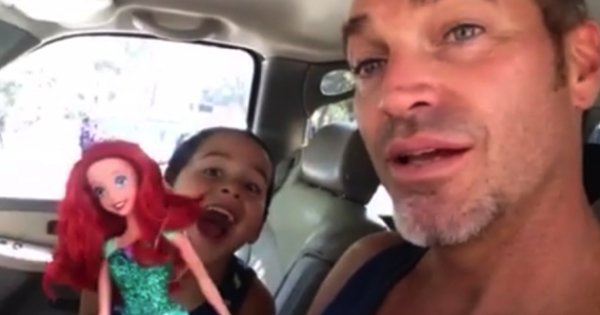 Meet California dad Mikki Willis. He’s being called “father of the year” after posting a video on Facebook supporting his son’s decision to buy a Little Mermaid Ariel doll at the store.

The filmmaker posted the video of his son Azai and explained he had taken he son to the store to exchange a birthday gift.

Azai wanted an Ariel doll. And Willis thought nothing of it, saying, “How do you think a dad feels when his son wants to get this? Ya! I let my boys choose their life.”

The video has been viewed over 14 million times on Facebook.

Many people wrote that Willis was a great dad.

And others said they’ve had similar experiences with their own sons.

Willis hopes that his video will inspire people to let their children “express themselves truthfully”.

How would you feel if your son chose this??

What This Grandpa Left Behind Before Dying Surprised Everyone. But It’s Absolutely Brilliant

0
When James K. Flanagan passed away on September 3, 2012, he left behind something absolutely amazing. Months before, he wrote a wise letter of...
Read more
Amazing

0
A Young Man Gets The Squad Car That Belonged To His Police Officer Father When a family member enters the police force, there is always...
Read more
Photography

Clash of the Titans