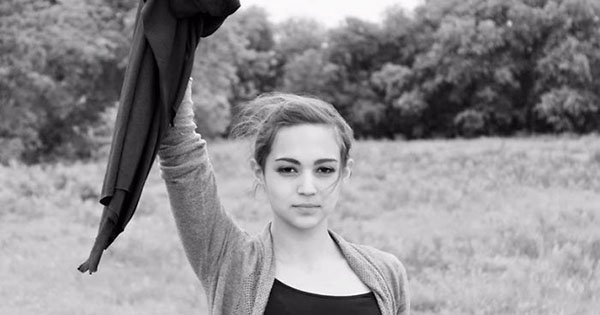 Since May last year, thousands of Iranian women have been posting pictures of themselves on Facebook not wearing headscarves. In Iran, where Islamic law is enforced, the simple act of women showing their hair is considered a punishable offence.

Since the Islamic revolution in 1979, religious fundamentalists who lead the Iranian government have required Iranian women over the age of 9 years to wear a hijab whenever they are out in public.

This rule is strictly enforced by the “morality police”. Last year there were 3.6 million cases of women being warned, fined, or arrested for “crimes against public prudence and morality.” To many Iranians, the hijab is a form of religious compliance as well as an exercise in modesty. But for many others, it is considered oppressive and limiting.

Masih Alinejad is one such woman. Aside from being an Iranian journalist, 38-year-old Alinejad is also an advocate and activist for religious freedom and women’s rights.

A year ago, she expressed her frustration about the compulsory hijab by posting a photo of herself driving in Iran without a hijab.

To Alinejad’s astonishment, her post was met with huge support from her fellow Iranian women, and soon thousands of them began sending in photos of themselves with their hair flying in the wind.

The response was so overwhelming that Alinejad decided to set up a Facebook page called My Stealthy Freedom. With over 803,000 followers, the page has become a place for quiet and courageous protest.

Even some women who believe in the hijab on religious grounds are joining the movement, calling for the freedom to choose to wear the veil.

In a film by Vox, Alinejad tells of her childhood in Iran, where she saw her brother enjoy the freedom that she never had. “How he was free to run in a green, lovely farm without headscarf,” she says in the video.

Living in the United States, she was witness to the stark difference between the diversity and freedom around her as compared with her home country.

“I love that!” she says. “Two women with headscarves, and two women without head scarves. Look at how they are free! They just, you know, walk past each other without judging each other. Without getting arrested by the morality police. Isn’t that beautiful?”

Alinejad points out that many men are also supportive of this movement.

Along with the photos submitted by Iranian women also come beautiful messages. One woman wrote: “I dream of the day that I can choose the style and color of my clothing, a tiny share of anyone’s human rights.”

But sadly, Alinejad says that “to be like this is forbidden in Iran.”

“Iran is for all Iranians. Iran is me and my mother. My mother wants to wear a scarf. I don’t want to wear a scarf,” Alinejad says defiantly. “Iran should be for both of us.”

Watch the powerful video below:

Learn more about My Stealthy Freedom via the Facebook page.

0
Meet Dalene Bowden, a lunch lady who lives in Pocatello, Idaho. Well, she was a lunch lady up until last week, where she worked at Irving Middle...
Read more
Fitness & Health

She’s Skating On A Frozen Lake. When The Camera Pans Out, I’m In Complete Awe

0
When Katrina Lazzarotto was asked if she'd like to go figure skating in the mountains of British Columbia, she happily said yes. After all,...
Read more