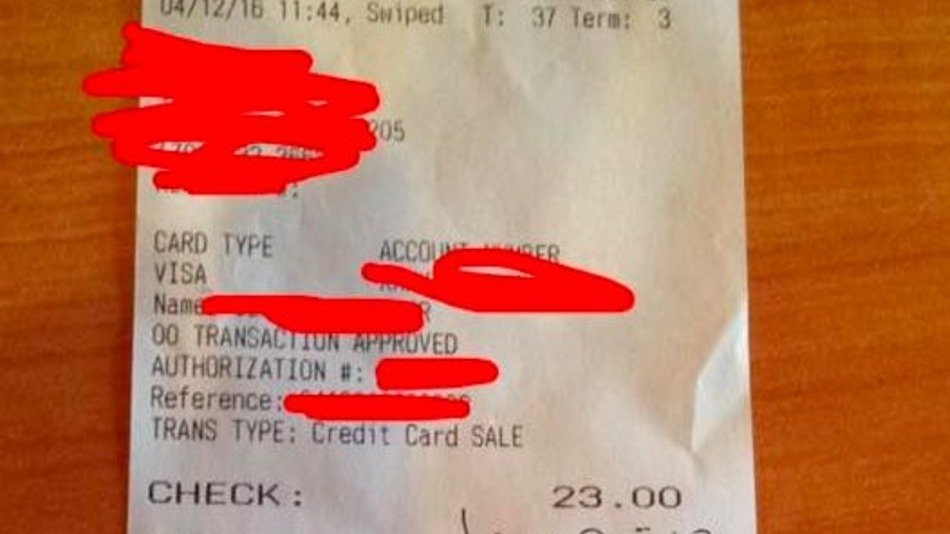 A waitress from North Carolina claims she was left a bible verse instead of a tip earlier this week.

Alexandra Judd was working at Zada Janes in Charlotte, North Carolina on Tuesday, when she claims that two patrons left her a bible verse on the tip line of their bill instead of cash — followed by a note at the bottom that says “praying for you.” 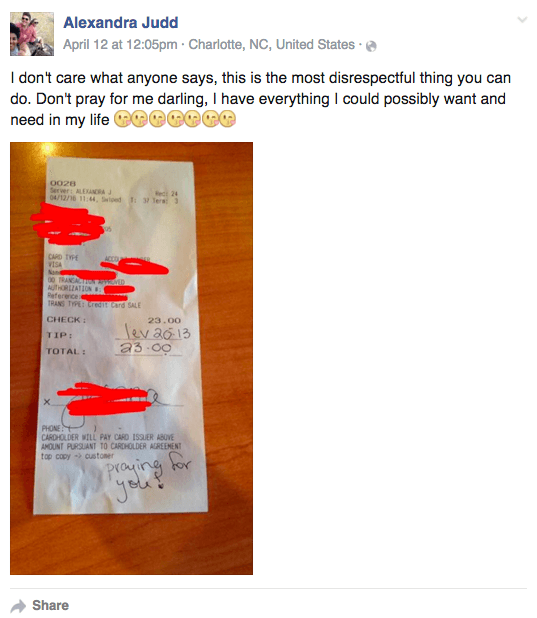 The customer wrote “Leviticus 20:13,” which reads, “If a man also lie with mankind, as he lieth with a woman, both of them have committed an abomination: they shall surely be put to death; their blood shall be upon them.”

Judd, who is gay, posted a censored photo of the bill to Facebook, which blocked out the customer’s name and credit card info.

“I don’t care what anyone says,” Judd wrote on Facebook, “this is the most disrespectful thing you can do. Don’t pray for me darling, I have everything I could possibly want and need in my life.”

‘I have everything I could possibly want and need in my life.’

Judd explained to the NY Daily News that the two women at the table asked for their bill to be split, one of them left a tip, the other left the note.

“I never thought people would discriminate against my sexuality that way,” Judd told the Daily News.

Prior to the bill being dropped off, Judd also says that the women were being rude to her.

“They just wouldn’t talk to me, wouldn’t answer my questions,” she told to the Daily News. “They were really off, it was just rude.”

The incident comes just weeks after Gov. Pat McCrory signed a law that erases previous discrimination protections on LGBT residents and forces transgender people to use the bathroom designated by the sex on their birth certificate.

The law has received a lot of backlash in recent weeks, especially from the entertainment world, as everyone from Ringo Starr to Cirque du Soleil have cancelled events in the state in protest.

Have something to add to this story? Share it in the comments.

Foster Son Starves While Mother And Daughter Feast. But Now Watch What This Stranger Does.

0
Artist Nemanja Pesic was created in 18th July, 1985. Currently he is living and working in Belgrade, Serbia. He is a home taught artist...
Read more
Photography