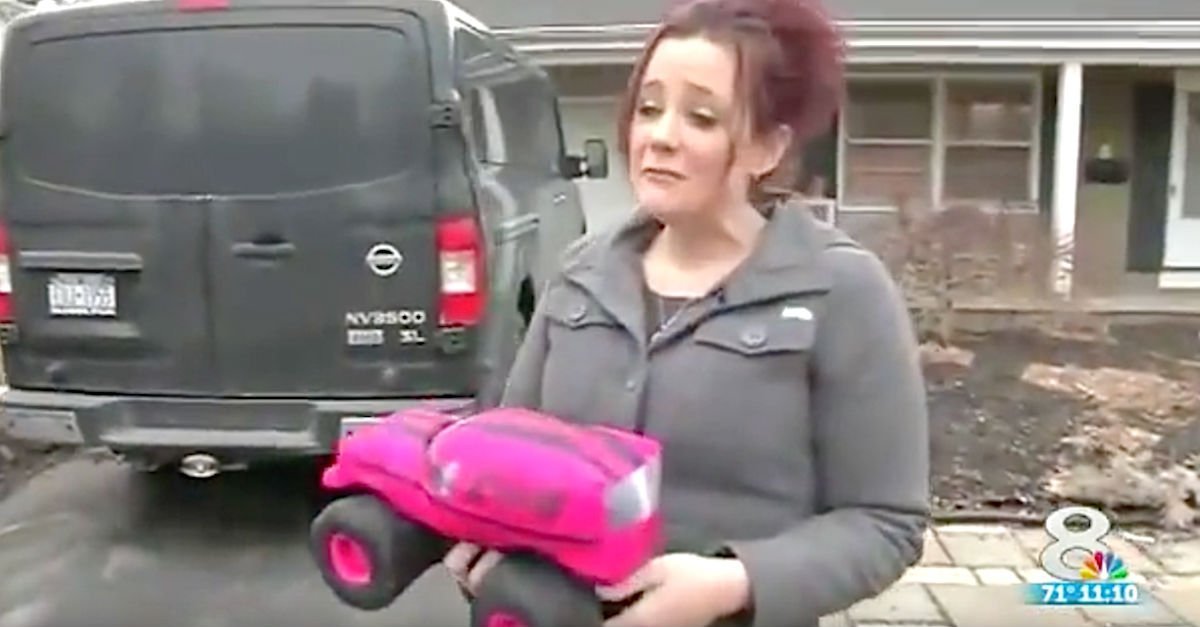 A mom in New York recently discovered something horrifying when she returned home from a monster truck rally. At the rally, mom Nicole had bought a pink stuffed monster truck for her 2-year-old daughter. Innocent enough, right? But when Nicole’s sister saw the truck, she immediately noticed something terrifying about it.

The truck’s roof has three symbols printed on it, and one of them—a heart within a heart—isn’t what it at first appears to be.

So what is the heart’s secret meaning? Nicole’s sister had recently seen an episode of “Law and Order: SVU” that featured the insignia. And as the show revealed, the heart within a heart is one of numerous symbols that pedophiles use to communicate their preferences to each other. In particular, the symbol on the pink truck means “girl lover.” When Nicole found out, she was horrified and started to spread the word about this alarming news.

Now that Nicole’s story has gotten out, the company that produces the toys, Feld Entertainment, has said that it didn’t know what it the heart insignia meant and promised to pull the toy from store shelves. In the meantime, an investigation is being carried out to find out how it got there.

While the presence on the horrifying symbol on a child’s toy doesn’t mean that that child is in danger, it’s something that parents should definitely be aware of and be on the lookout for. And if there if Nicole’s story has had any positive outcome, it is this: many parents are learning the truth behind the dark insignia and are now better equipped to protect their children.

See all of the secret symbols in the video below and please spread the word! Together we can protect our children!

9 THINGS MEN THINK WOMEN WANT IN A MATE, BUT THEY DON’T!

0
We all know that women and men have very different brains and therefore approach relationships quite differently.  Often times women try to be something...
Read more
Self Improvement

25 Things I Have Learned In My Life

0
In our instant gratification culture, it’s easy to forget that most personal change does not occur as a single static event in time, but...
Read more
Amazing

He Was Grieving Over The Death Of His Best Friend, Until An Old Man Told Him THIS. Mind Blown.