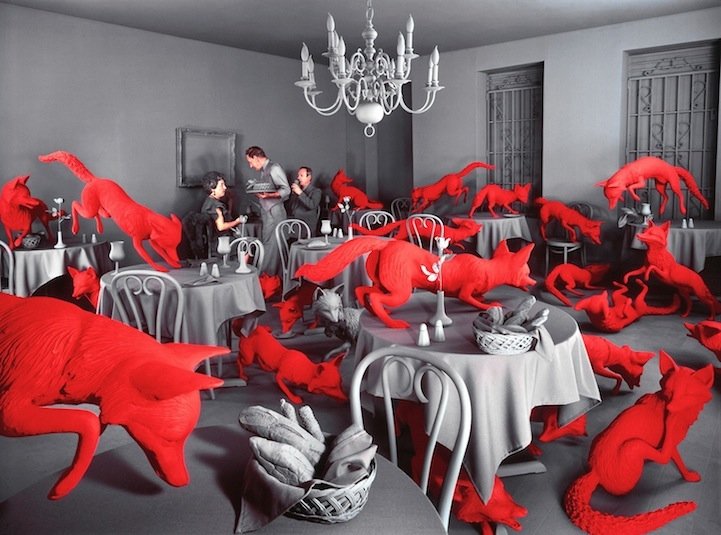 Decades before Photoshop was available, American artist Sandy Skoglund started creating surrealist images by building incredibly elaborate sets, a process which took months to complete. Her works are characterized by an overwhelming amount of one object and either bright, contrasting colors or a monochromatic color scheme.

Born in Quincy, Massachusetts in 1946, Skoglund studied studio art and art history at Smith College in Northampton, Massachusetts from 1964-1968. Moving to New York City in 1972, she started working as a conceptual artist, dealing with repetitive, process-oriented art production through the techniques of mark-making and photocopying. In 1978, she produced a series of repetitious food item still life images.

Skoglund was an art professor at the University of Hartford between 1973-1976. She is currently teaching photography and art installation/multimedia at Rutgers University in New Jersey.

REVENGE OF THE GOLDFISH © 1981 Sandy Skoglund

SQUIRRELS AT THE DRIVE-IN © 1991 Sandy Skoglund

The Wave – A Sandstone Rock

0
The Wave The Wave is a red-rock stunner on the border of Arizona and Utah, made of 190-million-year-old sand dunes that have turned to rock. L.A....
Read more
Self Improvement

It turns out that people who talk to themselves are geniuses