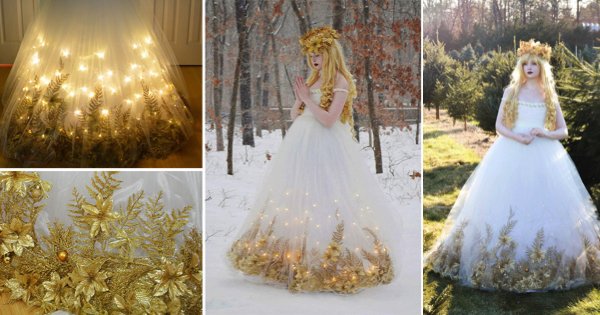 Angela Clayton is only 18 years old, but she has bucket loads of creativity and talent. The costume designer from Long Island, New York first started sewing three years ago when she became interested in cosplay.

Some of the more challenging dresses can take as long as 250 hours to make, and she once used 11 meters (12 yards) of fabric for a single costume.

“I hope that there is a future career that I will get out of it,” Clayton told Cosmo.

“I love making costumes and I love bringing ideas to life. If I could do that for fashion, especially for theater or film, that would be awesome… I would rather go straight into that if I can instead of spending four years at school.”

“I have one that I’ve been working on since January and I’m still not done with it, but I hopefully will be finishing it soon”

“I decided to just give myself more freedom for focusing on historical projects and original design.”

“If you practice, you can definitely do it. It might take you a while.”

“It comes naturally to some people but it is definitely something you can learn how to do.”

“I really enjoy doing it. I love making costumes and I love bringing ideas to life.”

To see more of Angela’s amazing creations, head over to her website.

0
Anse Chastanet St Lucia Resort is located in the picturesque town of Soufriere, the number one town in St Lucia when it comes to natural...
Read more
DIY Ideas

0
New Ways To Use A Muffin Tray Everyone loves eating muffins but what do you do with a muffin tray when you no longer have...
Read more
Amazing