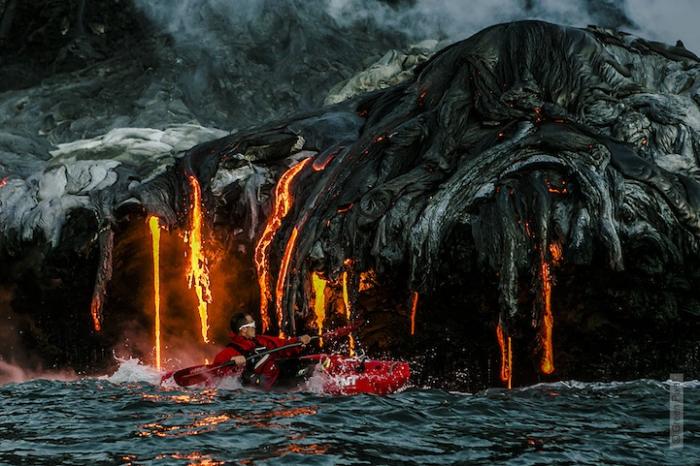 Extreme sports photographer Alexandre Socci accompanied professional kayaker Pedro Oliva and his team (including kayakers Ben Stookesberry and Chris Korbulic) as they decided to take on the turbulent waters surrounding Kilauea, an active volcano on the southeast slope of Mauna Loa in south-central Hawaii. Unlike a typical water expedition, though, the group kayaked alongside flows of molten lava as it streamed down the gushing volcano.

Originally in Hawaii to film the latest installment of their Brazilian TV program titled Kaiak for Channel OFF, Socci tells us that the group didn’t really know what to expect. He recounts the day for us: “We got out of bed at 3:30 AM to be in the harbor at 4 AM and get there at 5:45 AM, before sunrise, to get the best light to see the lava and the kayaks on water. We got there and for the first 20 minutes we were just looking at everything and trying to figure out what to do… then Pedro decided to get on his kayak and go for it…. We didn’t expect that.

“As a water photographer myself I was trying to get into the water but it was impossible, the water was about 90 degrees Celsius and there were lots of lava particles floating that could burn anything in seconds… even the kayaks came out of the water with some ‘scars’ from the floating lava!!!”

Socci’s incredible images say it all as the fiery molten rock can be seen oozing its way into the water just a few feet away from the daredevil kayakers. Like a scene straight from an exciting action sequence, the area is filled with blinding steam, wavy waters, and flaming lava. In fact, Oliva even caught one of his oars on fire due to its exposure to the lava flows. As a cautionary message, he says, “I hope people don’t see these images and think that it is safe to paddle so close to the lava because really it’s not safe at all.”

21 Inspirational Celebrity Quotes That Will Change Your Life

0
Not all celebrities live lives worth modeling after, but this list of inspirational celebrity quotes is worthwhile. All of the ladies on this list...
Read more
Fitness & Health

Some absolutely crucial advice: how to recognise a heart attack one month before it happens

0
Did you know that the main cause of early death in the US are heart attacks? The stressful way of life and the junk food we keep eating is a great...
Read more
Photography

0
Check out these amaizng Before-And-After Photos Of Autumn’s Beautiful Transformations. Without stopping to take a look around, we can sometimes miss the transition of our...
Read more